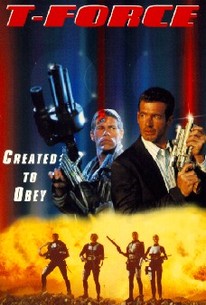 Technology runs amuck when an elite squad of police cyborgs turn on their masters in director Richard Pepin's action-packed sci-fi thriller. The future is now, and in order to minimize human casualties on the dangerous city streets, scientists have created a team lifelike androids that have been specially trained to do man's dirty work. Nicknamed the T-Force, these unstoppable humanoids are frequently sent to capture criminals who wouldn't hesitate to kill a flesh-and-blood cop. When the T-Force goes too far and shoots down a terrorist helicopter with six hostages on board, officials quickly decide to pull the plug on the project. The only problem is, the T-Force doesn't want to be shut down, and they have programmed themselves into extreme self-preservation mode as a precautionary safety measure. There is one lone cyborg who resisted the uprising though, and his name is Cain. When Lt. Jack Ford (Jack Scalia) is charged with the task of tracking down the renegade death machines, he's going to need all the help Cain can offer in order to take down the renegade robots restore order in the city.

There are no critic reviews yet for T-Force. Keep checking Rotten Tomatoes for updates!

There are no featured audience reviews yet. Click the link below to see what others say about T-Force!