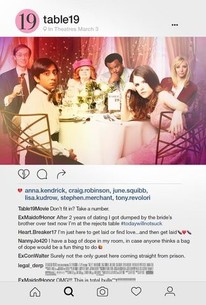 Critics Consensus: Table 19 is marginally more entertaining than actually sitting with a table full of strangers at a wedding -- although most screenings won't come with an open bar, which makes it a wash.

Critics Consensus: Table 19 is marginally more entertaining than actually sitting with a table full of strangers at a wedding -- although most screenings won't come with an open bar, which makes it a wash.

Critic Consensus: Table 19 is marginally more entertaining than actually sitting with a table full of strangers at a wedding -- although most screenings won't come with an open bar, which makes it a wash.

Ex-maid of honor Eloise- having been relieved of her duties after being unceremoniously dumped by the best man via text - decides to hold her head up high and attend her oldest friend's wedding anyway. She finds herself seated at the 'random' table in the back of the ballroom with a disparate group of strangers, most of whom should have known to just send regrets. As everyone's secrets are revealed, Eloise learns a thing or two from the denizens of Table 19. Friendships - and even a little romance - can happen under the most unlikely circumstances.

Amanda Crew
as Nikki
View All

Kendrick is such a whirl of energy that she makes even this underwritten role sparkle.

This is the human message of this amusing film: everyone's life gets messy at times. It's important to cut others some slack, even when it's not deserved.

Sadly, this wedding farce fails to bubble, thanks to unfunny dregs of a script written by the Duplass brothers.

Not quite stylish indie, and not quite Apatow-esque gross out rom-com.

The gags ought to have been put out of their misery and there's a deeply uncool unfeminist message.

Interesting premise, but it takes too long to get the story going...

The problem isn't just the script, but the inconsistent vibe that permeates every cell of the film yet never completely derails it.

Random, unpredictable behavior isn't nearly as funny as you might think (and as Blitz clearly thinks); it merely makes your film appear messy and disjointed.

It's nowhere near as deep as it seems to think it is, nor is it funny enough to pave over the faux-depth. So what starts off as a silly comedy becomes insufferable before even reaching the halfway point.

This is not a great film, but it is a reasonably good one.

The cast makes a valiant effort to make this film work, but it's more like a soap opera than a comedy.

Table 19 is a film that plays out very much like its subject matter. Like a wedding, you don't really know what you're gonna get when you attend a wedding. There could be absolute chaos or there could be heartwarming tears. Most of the time, it's somewhere in the middle. Table 19 has a bit of everything and for those reasons, it's undoubtedly an entertaining film, but it can be a bit of a mess. If this film wasn't recommended to me by a friend of mine, I don't know that I would have come across it. Which is shocking, because the cast is great from top to bottom. Anna Kendrick, Stephen Merchant, Wyatt Russell, June Squibb, Lisa Kudrow, Tony Revolori, and Craig Robinson round out this hodgepodge of a cast that works very well together on screen. The credit should certainly be given to the actors for their chemistry, but the Duplass brothers should also be noted for putting together yet another quirky and original script to the screen. I think where the problems for the film comes up is in the direction and rhythm of the storytellng. Right from the beginning we are sprung right into each of the ensembles brief introduction to the wedding, without much background to each character. For some characters, like Stephen Merchant's strange but hilarious Walter, or June Squibb's heart-wrenching turn as Jo, not providing much of a backstory was a good thing. But there are moments towards the end of the film that would have worked far more emotionally if there was more time spent with each character. However, thanks to the incredible cast, there are definitely some moving moments. The relationship each of them form by sitting at the un-paid-attention to Table 19 proves to be special for all of them for different reasons. So in that way, I'm on a completely different level than critics are for this film. Even with its bumpy direction at times, there's more to like than dislike. 7.0/10

Anna Kendrick usually finds herself in niche roles as the girl who can't quite seem to land the right guy until everything comes crashing down on top of her first. In this feature brought to us by Jeff Blitz (with a little help from the Duplass Brothers), Kendrick once again finds herself in a lover's quarrel that seems both unreal and far fetched. Table 19 seems standard enough to introduce us to a group of people who could keep us entertained over 90 minutes, but instead we get a grab-bag group of people who don't really develop any real interest for the audience to want to root for. Not even Kendrick's character develops enough to have her become someone worth seeing succeed. She's just a little too pouty and mopey to climb out of her rut despite everything working out in the end. The supporting cast has a handful of familiar faces, but everyone is too one-note. What makes the film tough to understand is whether or not Blitz is attempting to have this stand alone as a comedy with some underlying serious tones or vice versa. It comes off as awkward. Table 19 is only worth the watch if you find yourself wondering if Kendrick can carry a role like this, but otherwise, it's one worth waiting on for the bin.

This may just be me, but I feel as though every film that Anna Kendrick attaches herself to instantly becomes watchable, due to the fact that her likability is always the most present thing in any film she's in. No matter how good or bad, her charming nature always has me finding something to like about the film. In this case, most critics have found Table 19 to be extremely hollow and have given it an overwhelmingly low score. I had been looking forward to this one for a while, but after reading a few reviews, I reserved myself and hoped for at least something enjoyable. Happily, this is one of the rare occasions where I have to disagree with the majority vote. Table 19 is a charming, harmless, one-location film with a lot of heart and here is why I believe it deserves some attention. Taking place almost entirely at a wedding, six random people have been placed at Table 19, which is the table that the leftovers/single people are placed at. All there for having some sort of relation to either the bride or groom, they are all strangers to each other. All having problems of their own, they form an unlikely bond and begin to find joy at a place that none of them really want to be at. With the addition of relationships falling apart or coming back together in surprising ways, Table 19 keeps its overall premise quite interesting from start to finish. Never once did I find myself bored, due to the very breezy 80-minute run time and the loveable cast of characters. I may be putting this film on a higher pedestal than it deserves, by stating that the sole reason this film is so good is due to the fact that the cast works terrifically together, but when a film desperately needs to do that in order for the story to work, not much else is needed here. This is such a simple one location premise, that it does just rely on its cast to carry it. Happily, everyone from the very talented Anna Kendrick, to the loveable June Squibb, to the pleasant sight of seeing Lisa Kudrow in the spotlight again, to seeing the very likely pairing of actors like Craig Robinson, Toni Revolori, and Stephen Merchant, there was a lot to love about these characters. Giving just enough backstory to each character during subtle lines of dialogue, I felt like I was getting to know all of them by the end of the film. There are only a few plot details set-up throughout the course of the first act, so it's very predictable when viewers finally reach the third act. This film is almost too simple for its own good, but that's one of the reasons why I enjoyed it so much. This a very short, very sweet, and very relaxed movie that tugs on just the right heart strings to leave you feeling very happy by the time the film ends. Some of the character decisions will bother a few people and the conclusion may not be exactly what everyone hopes for or frankly what may not suit the overall movie, but I quite enjoyed the conclusion and would honestly watch a television show with these characters at other events. That's truly how much I began to enjoy watching them on-screen. In the end, one-location films will always divide audiences for the most part. Some will be bored by the fact that it isn't exploring enough and other will find themselves loving the simplicity. I'm an avid filmgoer so I can accommodate my liking to either of the two. Table 19 has a fantastic cast of characters, therefore making for a very enjoyable viewing experience. It's most likely not going to be on my most-liked films of 2017, but it won't be one I'll soon forget, so that's more than a positive response coming from me. I really enjoyed my viewing of Table 19 and anyone who enjoys to relax and watch a simple movie that is very well-done, I have no problem giving this a recommendation. To my surprise, I think Table 19 is a great little movie.