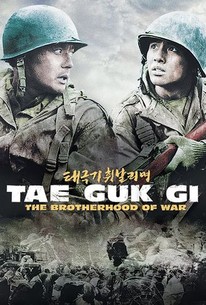 Critics Consensus: Tae Guk Gi: The Brotherhood of War sends viewers to the front lines of the Korean War, with grim yet rewarding results.

Critics Consensus: Tae Guk Gi: The Brotherhood of War sends viewers to the front lines of the Korean War, with grim yet rewarding results.

Critic Consensus: Tae Guk Gi: The Brotherhood of War sends viewers to the front lines of the Korean War, with grim yet rewarding results.

Korea's leading filmmaker, Kang Je-gyu, directed this epic-scale drama focusing on two brothers caught up in the madness of the war that tore their nation apart in the early '50s. Jin-seok Lee (Weon Bin) is a bright and well-educated young man whose older and more physically imposing brother Jin-tae Lee (Jang Dong-gun) believes he represents the best hope for his family's future. When both Jin-seok and Jin-tae are called up to fight in the South Korean army following the advance of Communist forces, a wary Jin-tae cuts a deal with his commanding officer -- if he racks up an impressive enough record on the battlefield, the army will give Jin-seok an early release. Jin-tae proves to be a fearless soldier, and is soon recognized as a war hero, but as the conflict wears on, he develops an unhealthy enthusiasm for the violence of the battlefield, and Jin-seok finds himself questioning his big brother's actions, both as a soldier and as a member of his family. The title Tae Guk Gi: The Brotherhood of War refers to the Korean name for the South Korean flag, originally designed in 1876 but outlawed during Japanese rule of the nation, and restored to use in 1948. ~ Mark Deming, Rovi

Critic Reviews for Tae Guk Gi: The Brotherhood of War

The battle scenes are amazing in their scope and vehemence. But in the breaks between fighting, the movie reminds us that the costs of war can exceed the loss of life and limb.

At times the performances seem more akin to the histrionics of old silent movies, when emotions had to be seen because they couldn't be heard.

Although flawed, the film is obviously successful in bringing to life what has been called the 20th century's 'forgotten war.'

While Tae Guk Gi's horrific imagery is peppered throughout with moments of surreal beauty, it remains one of the most realistic depictions of battlefield chaos I can think of.

Even with its overemotional moments, it's more honest than most.

Brutal yet meaningful, agonizing yet touching, The Brotherhood of War is a harrowing but rewarding experience.

It's an epic tale of jealousy, misplaced love and fraternal infighting that often feels closer in tone to Once Upon a Time in America than Platoon.

Kang Je-gyu seems to thrive in a film that could be described as a blockbuster regarding the war between North and South Korea, and individuals' relationships within this frame

It's powerfully moving and thoroughly involving, although rather over-constructed.

The beauty of writer/director Je-gyu Kang's work is his ability to gloss over the dramatic deficiencies with some of the best combat footage ever.

Tae Guk Gi joins the ranks of classic war epics, besting many of the Hollywood movies it aims to emulate.

Audience Reviews for Tae Guk Gi: The Brotherhood of War

The action is probably more intense than Saving Private Ryan and that means something! The story progresses from a slow beginning to an epic finale that might bring some to tears. Well worth watching!

I'd never have taken notice of the movie had it not been from the Oldboy director. I've no intention to patronize him, but he's done an outstanding job. His execution of one of the scenes still amazes me. It matched my facial expressions exactly with that of the character for that scene. This has been a unique experience for me. The movie depicts ups and downs between two brothers who are forced to draft in the 1950 Korean war. It shows how the priorities of one brother change momentarily as he gets to taste some fame, and its terrible outcome before he can snap out of it. While it's not yet-another-war-film IMO (of course, there are few familiar zones), it's certainly no masterpiece. The movie has its moments and is worth a watch if you can sit through scenes of guts falling out literally (on-screen). After all, although brotherhood is its heart and soul, it's also a war film to an extent.

Superb Korean war movie which focuses on two brothers who are drafted into the south Korean army after the communist north start to invade further south. The story is moving and powerful and the battle scenes echo those of Saving Private Ryan's with its gritty realism and bloody graphic violence. It's a must-see film that doesn't get embroiled in the political differences and portrays the ordinary people whose lives are turned upside down by the horrors of war.