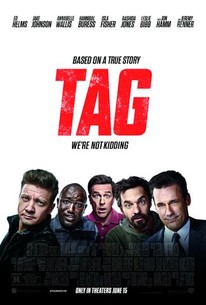 Critics Consensus: For audiences seeking a dose of high-concept yet undemanding action comedy, Tag might be close enough to it.

Critics Consensus: For audiences seeking a dose of high-concept yet undemanding action comedy, Tag might be close enough to it.

Critic Consensus: For audiences seeking a dose of high-concept yet undemanding action comedy, Tag might be close enough to it.

For one month every year, five highly competitive friends hit the ground running in a no-holds-barred game of tag they've been playing since the first grade--risking their necks, their jobs and their relationships to take each other down with the battle cry "You're It!" This year, the game coincides with the wedding of their only undefeated player, which should finally make him an easy target. But he knows they're coming... and he's ready. Based on a true story, "Tag" shows how far some guys will go to be the last man standing.

Thomas Middleditch
as Dave
View All

It really works out, it's a lot of fun, and stay through the credits.

There are women in the film, but none has anything you could call a personality.

A sweet central premise and a charismatic cast curdle into repetitious overkill and "gay panic" gags.

It's all a bit more sad than what you'd expect from a film with an extended set piece discussing the horrors of punches to the butt. It's a feeling that is unfortunately replicated in the film's cast.

Tag's real downfall comes as it shifts from lacklustre to offensive and insensitive.

Tag makes for a fun and often heartfelt, if somewhat inconsistent, ride.

A solid source of laughs in a summer that sorely needs them.

Some of the film is so incredibly stupid, it's funny.

All I can say is get ready to laugh a whole lot and get a little taste of your childhood thrown back in your face.

The film's ensemble cast couldn't be more wildly different, yet together they seem like something pretty wildly wonderful and funny and endearing.

[T]hese are some gratingly obnoxious men-children who operate with such a solipsistic bent that they feel more like fodder for satire than buddies to root for.

It may not be the funniest comedy, or the most insightful when it delves into the dynamics of male camaraderie, but there's just enough joy going on here to satisfy our need for entertainment.

A fun goofball comedy, Tag delivers a lot of laughs. The film follows a group of friends who have been playing a game of tag for over 20-years as they get together for one last round before one of their players retires with an undefeated record. Starring Ed Helms, Jon Hamm, Isla Fisher, and Jeremy Renner, the film has a strong cast that has good chemistry together and works well with this type of broad comedy. Yet, as outlandish as the jokes gets, the film has a surprising amount of heart. Entertaining and lighthearted, Tag is a hilarious film with a positive and touching message about friendship.

A real life 30 year game of tag "you're it!" is the basis of this light summer comedy, that stars a pretty decent cast. You won't remember much of it afterwards, but you won't feel as if you've been gypped with half-assed, phoned-in performances miming a half-assed, phoned in script either. And it might well be rewatchable to boot. Okay stuff.

ag is based on the true story of a group of grown men who continue to play a highly competitive game of tag for 30 years. There are even real clips of the real men before the end credits, raising the hope for a potential documentary on the subject. The Hollywood version is a sprightly ensemble comedy that's not afraid to go silly or dark in its pursuit of laughs. Given the nature of its premise, there is a lot of slapstick to behold, but it was cleverly staged, routinely netting some big laughs from me. This is a definitely adults-only R-rated venture and the movie proudly wears this identity on its sleeve, finding strange and exciting comic detours that can walk a fine tonal line, like an ongoing bit about miscarriages that had me wincing as much as I was laughing. The main characters are all relatively familiar types; Ed Helms is the high-strung dweeb, Jake Johnson is a sarcastic stoner, Jon Hamm is a smarmy exec, Hannibal Buress is as laconic as his standup persona. There are a string of supporting characters (often female) that add very little, including a rekindled love triangle with Rashida Jones, a journalist who tags along on the game and adds nothing, and Isla Fisher as the grating, always-yelling, intense wife to Helms. Surprisingly, the funniest member of the movie is Jeremy Renner, an actor who heretofore had never shown much comic ability in movies. He's a formidable opponent, and every time he went into his Sherlock Holmes-styled voice over detailing the steps and mistakes of his friends, I loved it. Also, strangely, Renner's arms are actually CGI arms since he broke them days into filming. You would never be able to tell. I appreciated that Tag is directed as a comedy even during its action set pieces. It looks at action through the lens of comedy and taps into the absurdity. Overall, Tag is a fun, rambunctious comedy with some dark impulses yet it still finds room for sentiment that doesn't feel entirely out of place. 2018 is shaping up to be the year of the hearty, enjoyable R-rated comedy with Tag joining the ranks of Blockers and Game Night. Catch it while you can if the prospect of men behaving like overgrown children appeals. Nate's Grade: B

There are times when a true story lends itself to a film in an emotionally resonant way and other times when it's simply done in order to impress or deliver laughs to an audience. That being said, Tag is a rare film that sort of relies on all of those things and more, which sort of makes for a weird experience at the movies. I have been looking forward to this film for a while and hearing that it was based on a true story made me that much more intrigued by it. Personally, I enjoyed my experience watching this film, but upon reflection, I can see why many viewers may find it boring or wish for it to be a much funnier romp. Here's why I would recommend Tag if you can check your expectations at the door and not expect it to be a hilarious movie from start to finish. Following a group of friends who have been playing the same game of tag for over thirty years, as a way of staying friends, they make it their mission to finally tag their friend Jerry, who has been the champion forever. Yes, the plot is silly and outlandish, as is the movie itself, but the fact that people are actually out there in the real world doing this, made for a much more subdued experience. At its core, this is a film about friendship and the comedic aspect of this film simply comes from whenever the writers decided to add jokes into the core premise of the movie. The emotional core is really what hooked me throughout this movie. It seems strange to say that the dramatic aspects of a movie that follows older men playing tag are the best portions of the film, but that's truly where I found myself most impacted by it. Yes, there are some very funny lines of dialogue that I'm still replaying in my head, but they are few and far between, making way for the third act, which isn't exactly the type of conclusion I was expecting. Without giving anything away (and if you don't know the way this true story ends), this film ends on a note that actually had me slightly tearing up. This truly is a movie about friendship, first and foremost. For that reason alone, I forgave the fact that it wasn't loaded with comedy. Now, that's precisely why I believe certain viewers will be turned off by this film. Most people will look at the trailers and think they're going to see a laugh riot, and like I said, there are jokes that work very well, but it's sort of a blend of both comedy and drama. If you're able to gravitate toward that throughout your viewing experience, then I can definitely say this is the movie for you. A good story always trumps good jokes in my opinion. A movie could have lame jokes, but if the core plot is holding it together, then it's not a complete flop in my opinion. Tag benefits from a very dedicated cast, with standouts being Hannibal Buress and Jake Johnson. These dedicated performers made this a very believable (albeit ridiculous) movie to watch. With some clever editing choices and quite frankly some cool choices in terms of cinematography, this movie tried to be much more than it needed to be, so I absolutely have to commend it for that. This is a comedy that you shouldn't be seeing for the comedy, but you'll still be rewarded with some hilarious moments. See this film for the camaraderie of friendship and I think you'll have a good time with it, as I did. It's not a great movie by any means, but it's a solid time at the movies.