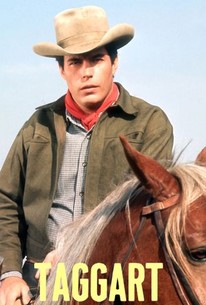 In this western, the trouble begins when a rancher's mother and father are killed by a young outlaw and his family who want his land. The son returns the favor and slaughters them. As the father lies dying, he manages to hire three gunslingers to track the boy down. The boy is a good shot though and kills two of the hired guns and then flees into Indian territory. There he meets an old miner, his wife and their daughter. The remaining gunslinger finds him, but is taken prisoner by the miner. Later, the saucy wife makes a pass at the young man, but he rejects her. In retaliation, she frees the gunman, steals her husband's gold and takes off. She ends up being killed by the Indians. Meanwhile, the daughter, the miner, and the rancher's son are busy fighting off an attack of their own. They then ride off after the fleeing gunman whose horse is so laden down with gold that it collapses. This allows the son to shoot him dead. Afterwards, the son and the miner's daughter get hitched and live happily ever after. ~ Sandra Brennan, Rovi

There are no critic reviews yet for Taggart. Keep checking Rotten Tomatoes for updates!

There are no featured reviews for Taggart at this time.