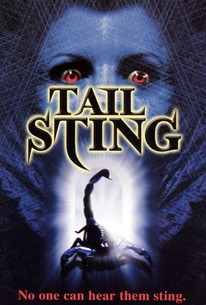 Tail Sting is a low-budget thriller released straight to video from York Entertainment. Pilot Jack Russell (Robert Merrill) is flying a plane across the ocean. Dr. Jennifer Ryan (Laura Putney) is a passenger on the plane in the process of transporting a cargo of genetically modified scorpions for research purposes. Meanwhile,Yaffi (Gulshan Grover) and his brother are trying to smuggle themselves across the border. Inevitably, someone lets out the scorpions and mayhem ensues.

Joe Bonny
as Fred, The Guard

If I had to guess, they were going for a combination of Ridley Scott's "Alien," Jack Arnold's "Creature from the Black Lagoon," and the Zucker Brothers "Airplane" -- and, by God, they succeeded!

This film is 100 percent funny, not sure if its supposed to be but it was a riot. A drive in type film that just made me laugh from start to finish. Scorpions are being brought back from South American, when someone gets in cargo hold to find out what the good Dr is bringing back, of course they get out of jars and grown into giant scorpions and run a muck on the plane. Its just a fun movie. Don't expect to much, go in looking for a laugh. 4 Stars been a long time since I laugh this hard.