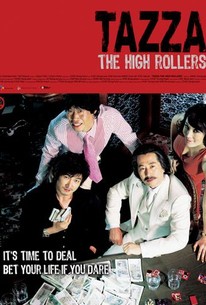 A guy with a talent for cards makes his way into the dangerous world of underground gambling in this crime thriller from South Korea. Go-ni (Jo Seung-woo) is a small-town guy with a big appetite for gambling. Convinced he's on a hot streak one evening during a card game, Go-ni bets his life savings on a hand of hwatu, only to lose to a crooked cardsharp. Determined to get revenge, Go-ni sets out to find the guy who cheated him and win back his money. Go-ni's travels lead him to Pyeong Gyeong-jang (Baek Yun-shik), an unusually gifted card player who has gotten out of the game. Pyeong sees a talented protégé in Go-ni and takes him under his wing, introducing him to Madam Jeong (Kim Hye-su), an equally gifted female gambler. Jeong is attracted to the young and handsome Go-ni and takes him on as both a student and a lover, but the young man soon learns how dangerous a gambler's trade can be when he wins a hefty bankroll from Kwak Cheol-yeong (Kim Eung-su), an underworld kingpin who doesn't take losing lightly. Go-ni also foolishly breaks off his affair with Jeong when he falls for Hwa-ran (Lee Su-gyeong), a beautiful woman who runs a nightspot, and makes an enemy of A-gui (Kim Yun-seok), a thug with a hair-trigger temper who holds a grudge against Pyeong. As the various characters come together for a major hwatu tournament, Go-ni struggles to keep his mind on the game as he's forced to keep his eye peeled for enemies prepared to claim his life. ~ Mark Deming, Rovi

It's a ton of fun, a totally irresistible tale of gambling, greed, love and violence. With gorgeous actors, designer clothes and thrilling action, it's fast-moving (even at 2 hours, 20 minutes) popcorn entertainment.

...a sort of demented Karate Kid of the cards

The twists and turns continue until the very end of Choi's mesmerizing, high-energy romp, whose 139 minutes zip by like a round of speed poker.

Fun, good cast, it does feel that it takes way too much time in telling the story, but the characters are well written and engaging. Kim Hye-Su made me touch myself several times.