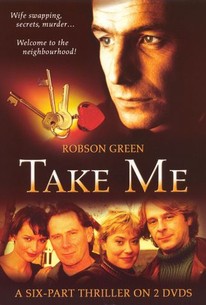 Airing originally on British television, Take Me concerns a couple who are attempting to work through a very difficult time in their marriage. Jack (Robson Green) and Kay (Beth Goddard) have attempted to wipe the slate clean by moving to an underpopulated small town. The couple becomes embroiled in a local mystery, something that along with the stress of the marriage takes its toll on both of them.

Critic Reviews for Take Me

There are no critic reviews yet for Take Me. Keep checking Rotten Tomatoes for updates!

There are no featured reviews for Take Me at this time.