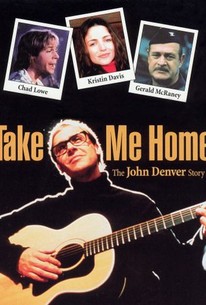 Henry John Deutchendorf started his career in music as a guitar-strumming folkie who got his first big break as a member of The Chad Mitchell Trio in the early 1960s; with the dawn of the 1970s, as John Denver he became one of the biggest and most recognizable figures in popular music, and this made-for-TV drama examines his life and career both on and off-stage. Born the son of an Air Force pilot (Gerald McRaney), John Denver (Chad Lowe) sought the approval of his father, who didn't think much of his son's desire to become a musician. But once Denver heard his calling, he hit the road, first with the Chad Mitchell Trio and later as a solo act. Along the way, Denver met Annie (Kristin Davis), whom he would later marry and who would inspire one of his best-known songs. After several years of struggle (buoyed by Peter, Paul, and Mary's hit recording of his song "Leavin' On a Jet Plane", Denver finally found commercial success with the song "Take Me Home, Country Roads" in 1972. But Denver's new success did not win him the love of his father, and his busy touring schedule took a toll on his marriage; when Denver's career fell into a slump in the '80s, he found himself alone without a wife, and began developing a serious problem with depression and alcohol. Based on John Denver's autobiography, Take Me Home: The John Denver Story features 15 of his original recordings on the soundtrack; originally produced for CBS, the film was first aired April 30, 2000.

Critic Reviews for Take Me Home: The John Denver Story

There are no critic reviews yet for Take Me Home: The John Denver Story. Keep checking Rotten Tomatoes for updates!

Audience Reviews for Take Me Home: The John Denver Story

There are no featured audience reviews yet. Click the link below to see what others say about Take Me Home: The John Denver Story!