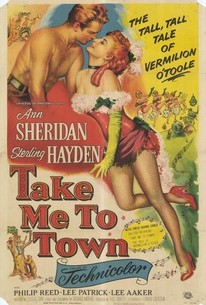 Take Me to Town Photos

Take Me to Town is one of the most likeable westerns of the 1950s. On the lam from the police, saloon-gal Vermilion O'Toole (Anne Sheridan) takes refuge in a logging community. Here she meets the three precocious children of preacher-timberman Will Hall (Sterling Hayden), whereupon the kids decide that Vermilion would make a perfect bride for their widowed father. Eventually, Vermilion ingratiates herself with the rest of the community by organizing a musical show to help pay for the construction of a new church. But things look bleak for our heroine when lawman Ed Daggett (Larry Gates) catches up with her -- especially since, by this time, the taciturn Will Hall has fallen in love with her. Full of delightful little touches and vivid characterizations, Take Me to Town is a film that deserves to be better known, especially since its director, Douglas Sirk, has been praised to skies for far less enjoyable films than this.

Sterling Hayden
as Will Hall

Jerry Wayne
as Boy
View All

Critic Reviews for Take Me to Town

There are no featured reviews for Take Me to Town at this time.

Take Me to Town Quotes