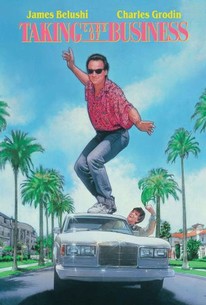 James Belushi and Charles Grodin team up for this variation on the Prince and the Pauper. Belushi plays Jimmy Dworski, a convicted car thief, serving time in a minimum security prison. But when Jimmy wins a pair of tickets to the World Series from a radio call-in show, he can't resist walking out of jail, particularly when the warden won't even let the inmates watch the series on television. Grodin plays rich workaholic Spencer Barnes, who, when his wife walks out on him right before a long-planned vacation, leaves his datebook in an airport telephone booth. Happening upon Spencer's datebook is Jimmy, who simply intends to return the datebook to Spencer for a 1,000-dollar reward. But when he finds the datebook contains his credit cards, Jimmy assumes Spencer's identity, living the good life and dating the boss's daughter, while making his way to Malibu to return the property to Spencer.

Hector Elizondo
as The Warden

Janet Julian
as Woman on Plane

This is a pretty stupid comedy in spots, with holes wide enough to drive trucks through, and director Arthur Hiller is as clunky as ever, but the cast is so funny and likable that they almost bring it off in spite of itself.

Brash Belushi and befuddled Grodin are perfect casting for yarn about a likable escaped con who assumes the identity of a stuffy, overworked ad agency exec.

The roles fit Belushi/Grodin like rubber, but the rest is second-rate.

Taking Care of Business plays it safe and boring.

This one is as predictable as sunrise and as stale as bedpost gum.

Fun comedy with satire and a pleasant performance by John de Lancie.

A series lame jokes and clunky plot machinations that would strike as cynical were they not so obviously desperate.

Oh, what a couple of seasoned stars can do with a formula.

It's also unexpectedly likeable, thanks to the high-spirited performances of stars James Belushi and Charles Grodin, under the relaxed direction by Arthur Hiller.

A great little comedy from the early 90's with James Belushi playing a likeable con who escapes from prison to attend the World Series while getting his fellow in-mates to cover it up. Whilst on the outside he stumbles upon uptight business executive Spencer Barnes (Charles Grodin) Filofax personal organizer and ends up assuming his identity living it up in the lap of luxury turning Spencer's life upside down along the way. Now all he needs to do is break back in before the warden realizes what has happened because Belushi only has two days to go before his release from prison.

A funny and entertaining movie, I enjoyed it more than I thought I would.

Funny, but nothing to write home about.

Not only does the movie have Jim Belushi but it has Charles Grodin. Thats a true pairing of unfunny hacks!