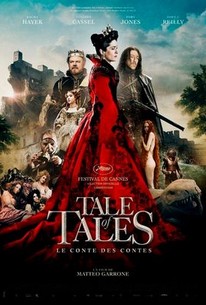 Critics Consensus: Visually splendid and narratively satisfying, Tale of Tales packs an off-kilter wallop for mature viewers in search of something different.

Critics Consensus: Visually splendid and narratively satisfying, Tale of Tales packs an off-kilter wallop for mature viewers in search of something different.

Critic Consensus: Visually splendid and narratively satisfying, Tale of Tales packs an off-kilter wallop for mature viewers in search of something different.

Once upon a time there were three neighboring kingdoms each with a magnificent castle, from which ruled kings and queens, princes and princesses. One king was a fornicating libertine, another captivated by a strange animal, while one of the queens was obsessed by her wish for a child. Sorcerers and fairies, fearsome monsters, ogres and old washerwomen, acrobats and courtesans are the protagonists of this loose interpretation of the celebrated tales of Giambattista Basile.

Giuseppina Cervizzi
as Dama di corte, Lady of the Court

Giselda Volodi
as Lady of the Court, Dama di corte

A timeless portrayal of the bonds of sisterly love, a theme amplified by both the defiance and pathos of Henderson's wonderful performance.

The adult fairytale is a freakish, hybrid, disturbing creature, mostly forgotten in these days of Disney sanitisation, but Tale of Tales resurrects the genre with surreal humour and gothic horror.

Tale Of Tales is a Felliniesque fantasy drama, distinguished by its lavish production design and very fluid camera work.

This is fantastically unhinged, veering madly between wonder and horror, gorgeousness and grotesquery.

We're tickled, we're charmed and we're still wondering what the point was.

Garrone's accomplishment follows in the footsteps of classic Italian auteurs, a carnivalesque metaphor on a grand scale with superb visual elements we used to see from directors like Federico Fellini and Pier Paolo Pasolini.

Tale of Tales feels like David Cronenberg hijacked the set of Faerie Tale Theatre with an EXistenZ gristle gun. If only there was some more shape to this thing! Too many scenes struggle on awkwardly, like a slain animal that doesn't know it's dead yet.

Eddie Falvey
One Room With A View

Tale of Tales is a unique vision that transports you into a magical, dangerous parallel fantasy world that's grotesque, beautiful, extraordinary, strange, where familiar things are distorted and anything imaginable is possible.

Garrone revels in outing the rhetoric and ironies of his stories through a maverick approach to cinematography and the overall geography of his worlds.

Set in a beautifully lurid world of magic and eccentricity, with sumptuous costumes, lavish hair and beguiling makeup (and even some nice acting), "Tale of Tales" is much more a visual entertainment than a tale. The story is a bizarre stream of consciousness seemingly designed for the sole purpose of exhibiting the next grotesque vision of an otherwise capable director. All the stars I awarded are for style and technical execution -- certainly not for storytelling.

The costume design and art direction stand out in this messy film that lacks cohesion and suffers from serious tonal problems as it moves from amusing dark farce into something uncomfortably grotesque - and it is frustrating that it doesn't seem to go anywhere.

Beautiful. Sometimes, you just want to look at a piece of art, and this moving painting does not disappoint. Three different stories, loosely tied to each other in continuity and fully tied to each other thematically are effectively interwoven to create and subvert the modern fairy tale. Much of it is comical, most of it is disturbing, and all of it is compelling. It is so compelling that you almost forget the low points. There are a few minutes of drag time, and Hayek is a bit wooden. The conclusion seems to be...arbitrary? I can imagine allusions to The Princess Bride being drawn, but I would definitely prefer to watch this one if given the option. It has enough boobs and ogres to keep the simpleton watching, and it is intellectually stimulating enough that a fun-loving cinephile would readily enjoy it for all that it is.