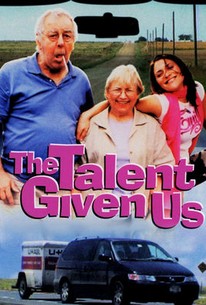 Critics Consensus: The Talent Given Us is an odd hybrid of reality and fiction, but works due to its engaging characters.

Critics Consensus: The Talent Given Us is an odd hybrid of reality and fiction, but works due to its engaging characters.

Critic Consensus: The Talent Given Us is an odd hybrid of reality and fiction, but works due to its engaging characters.

The Talent Given Us Photos

Fact and fiction begin to blur in this comedy drama in which a filmmaker casts his parents, his siblings, and himself in a story loosely adapted from their own lives and personalities. Judy and Allen Wagner (played by Judy Wagner and Allen Wagner) are an elderly couple living in New York City who haven't seen their son, Andrew (Andrew Wagner), in some time. Deciding it's time they paid him a visit, Judy and Allen pack up their van and head out to Los Angeles, where Andrew is trying to make a name for himself as a director and screenwriter. Along the way, Judy and Allen decide to bring their daughters, Maggie (Maggie Wagner) and Emily (Emily Wagner), and the camera plays "fly on the wall" as Judy and Allen openly ponder the successes and failings of their children while they work on crossword puzzles, stop for meals, engage in small talk, and deal with the presence of fellow traveler Bumby (Judy Dixon). The first feature from Andrew Wagner, The Talent Given Us was awarded the Grand Jury Prize at the 2004 CineVegas Film Festival.

Critic Reviews for The Talent Given Us

Faux documentary, home movie or unexpurgated family therapy? The Talent Given Us, a funny, surprising ride with a mercurial New York clan, is all three.

[A] one-of-a-kind movie that sends the family road-trip genre happily spinning into these self-obsessed, overanalytical times; it's National Lampoon's Vacation as re-imagined by Dr. Phil.

The notion that there is no escape from one's family is elevated-and ameliorated-by the inkling that the Wagners' story is, in fact, real.

Ultimately, the movie isn't as strong as the idea behind the movie, or the people inside that idea.

What initially seems hard to watch, even excruciating at times, becomes hard not to, a fascinating fiction that seems to be more real than just about any actual documentary you can imagine.

If you enjoy HBO's cult hit Curb Your Enthusiasm, you're almost guaranteed to enjoy this bawdy, heartbreaking, deeply discomfiting mockumentary.

It's a self-indulgent, utterly painful film that attempts to explore all sorts of genres, but it fails.

The ranting, whining, kvetching, self-involved family begins to outstay its welcome [...] so that time spent with them can feel like entrapment at a raucous bar mitzvah reception.

The unwashed talent and originality of "The Talent Given Us" makes it a compelling and fascinating film.

Maybe Andrew Wagner was hoping they would be endearingly human, but instead they come off as annoying, hardly the type of people we want to be stuck with for an hour and a half.

The result is a funny and sometimes touching docu-comedy, sort of like watching your parents if they were in the middle of a Woody Allen movie.

Andrew Wagner's deeply original, awe-inspiring The Talent Given Us defies classification, another mongrel marvel traducing the boundaries of documentary and fiction.

Audience Reviews for The Talent Given Us

There are no featured audience reviews yet. Click the link below to see what others say about The Talent Given Us!

The Talent Given Us Quotes