Tales From the Crypt1972 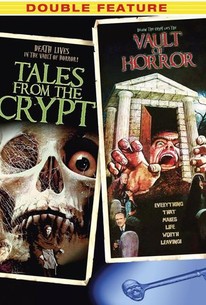 Tales From the Crypt Photos

The phenomenon of Tales from the Crypt seems to have no endings, only changes. This successful pun-filled style of presenting ironic horror tales had its beginnings in William Gaine's E.C. comic series. At one time, outlandish E.C. Comics were at the heart of a national furor over the "evils" of comic books, which were thought to lead to moral degeneracy. The big comic-book publishers were frightened into freezing E.C. out of their distribution network, which killed the business. This British movie was based on the Tales from the Crypt series, which spawned several subsequent movies (and many imitators), at least one television series, and a whole new wave of comic books. Released in 1972, this movie has five episodes based on Gaines' stories, each introduced by Sir Ralph Richardson as the eerily cheery Crypt Keeper. His comedic approach to the role was misunderstood at the time, as reviewers expected a more solemn approach to horror. In "All Through the House," Santa Claus is someone to avoid. In "Reflection of Death" it takes some people a while to realize the truth about themselves. In "Poetic Justice" death cannot prevent one man's revenge. The episode "Blind Alley" demonstrates a new use for razor blades. "Wish You Were Here" cautions against taking native artifacts lightly (among other things). Among the stars featured are Peter Cushing, Joan Collins and Patrick Magee.

John Barrard
as Other Blind Man

Carl Bernard
as Other Blind Man

Chris Cannon
as Other Blind Man

Louis Mansi
as Other Blind Man

Hedger Wallace
as Detective
View All

Critic Reviews for Tales From the Crypt

The misanthropy of the Tales From The Crypt and Vault Of Horror movies is strangely enjoyable, because it comes packaged within some gleefully perverse ideas.

This British production looks handsome enough under Freddie Francis's direction, and for those who say they'd watch Ralph Richardson in anything, well, here's your chance.

Unfortunately, the only style exhibited by Freddie Francis, who directed the film, and Milton Subotsky, who wrote it, is in their dumb appreciation for ancient plot devices, and especially in their high-handedness with other people's stories.

It's put together something like the comic books, with the old Crypt Keeper acting as host and narrator. In the movie version, he is played with suitable ham by Ralph Richardson.

The best vignette finds Peter Cushing delivering one of the finest performances of his long career.

It's easily forgotten, but just as easily recalled for being a lot of fun. Which seems to fall perfectly in line with Tales From the Crypt's pop-culture legacy.

The lows are still pretty good, and the highs are off the charts.

This excellent anthology of horror tales drawn from EC comics features Ralph Richardson as the crypt keeper who reveals a quintet of fearsome futures to a veteran British cast of terror troupers.

Tales from the Crypt is a wholly successful portmanteau horror film that delights in changing things up with each story.

The first killer Claus may be the 'homicidal maniac' in a Santa suit who menaces Christmas Eve murderess Joan Collins in this British anthology horror movie inspired by the EC horror comics of the 1950s.

Audience Reviews for Tales From the Crypt

Original British horror anthology based on EC's 'Tales from the Crypt' which would eventually lead to the more well known US TV series and films. As usual Amicus are behind the tales of terror. Being a British version of the old comic its naturally slightly reserved and a little more serious or gloomy. The cast is made up of some classy stalwartly Brits such as Peter Cushing and Ralph Richardson and many well known characters actors of British film, TV and theatre. The five short stories are interesting but not wild effects packed thrillers as the later movies. The first has Joan Collins murdering her husband at Xmas but being strangled herself by an escaped loony dressed up as Santa who was let in the house by her little girl. Second has a cheating husband seeing his own death and coming back as the undead. Third shows Peter Cushing as an old man being hounded by his snobby neighbours to move as they dislike his scruffy presence next door. The old man commits suicide then comes back from the dead to exact revenge. Fourth story is a variation on the famous short 'The Monkey's Paw' (also spoofed by 'The Simpsons' so well in their Halloween episodes). A recently widowed woman makes bad choices or wishes with a small Oriental statue causing herself much grief. The last story shows what happens to a mean money pinching man who runs a home for blind men very badly. The residents get their revenge on the Scrooge-like director of the so called care home. The stories are told as predictions of the future by the crypt keeper to a group of people visiting some old catacombs, the frame/wrap plot. The keeper is a much more serious take on what you may be used to these days, very monk like, a normal human face, well spoken, almost like the Grim Reaper. The stories are also quite tame and not overly exciting by today's standards. Some blood on show but its pretty clearly red paint and the odd good bit of makeup/prosthetics on the undead. Peter Cushing's small performance as a zombie is actually extremely unnerving down to the quite ghastly makeup applied to his gaunt face, kudos there. The film isn't as fun I thought, its kinda dull and takes itself too seriously. The stories are fair but lean more towards simple revenge without much visual gore or goo, that's perfectly fine but I always thought these anthologies need at least one or two good monster/creature features. The finale vignette for example, about the care home for the blind, is very strange. At first you feel sorry for the elderly men being pushed around by the new director, but when they take their revenge it seems way too extreme and nasty frankly, you end up feeling sorry for the director and his dog. The same can be said for the woman and her Chinese figurine. She's not a bad person, she merely makes wishes that turn sour on her so again you're not too sure how to feel towards that character, you feel for her in the end. As for the Joan Collins short story...that's just unscary and bloody obvious right from the start (no pun intended), just a dull murder tale. The best and most inventive tale must be 'Refection of Death' with the man seeing his own death, brilliant twist at the very end there. In the end the bookend plot involving all the people in the catacombs has a nice eerie twist which isn't overly original as this twist does pop up in other anthology movies. Never the less it works really well despite the dodgy sets and effects of the time, rather predictable though methinks. An Interesting set of horror stories, not a thrilling set but fun to watch all the over acting and reactions. Certainly one of the better made horror anthologies if a bit bland in places.

I love the demented storytelling of Tales from the Crypt. I think it's great how they normally end with a character suffering for eternity as a result of their soulless behavior. This film includes 5 solid tales from the comics. Be warned, this movie is nearly 40 years old. Some of the scenes, especially the gore and makeup, suffer greatly due to age. If you can't suspend disbelief, you might be disappointed with this, but the storytelling is absolutely top notch.

This film came from the Midnite Movie Double Feature Collection, and I believe this is where Tales from the Crypt got its start. Five people are on tour of a catacomb when they become lost and sealed in a chamber, each one has a story that unfolds in front of them or is it behind them. Great Drive -Inn Swill. 3 1/2 stars.

An absolutely stellar horror film. One of the few that still creeps out to this day. Peter Cushing's Grimsdyke zombie is the greatest zombie in horror history. All of the stories in this collection are great and Freddie Francis doesn't disappoint.

Tales From the Crypt Quotes