Tales from the Crypt Presents Bordello of Blood1996

Tales from the Crypt Presents Bordello of Blood (1996) 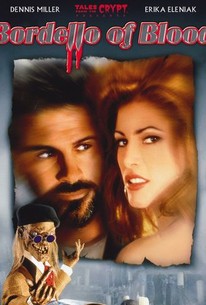 Critics Consensus: Bordello of Blood is not as scary or funny as it thinks it is (or should've been), and all of Dennis Miller's lines sound like castoffs from his stand-up material.

Critics Consensus: Bordello of Blood is not as scary or funny as it thinks it is (or should've been), and all of Dennis Miller's lines sound like castoffs from his stand-up material.

Critic Consensus: Bordello of Blood is not as scary or funny as it thinks it is (or should've been), and all of Dennis Miller's lines sound like castoffs from his stand-up material.

Tales from the Crypt Presents Bordello of Blood Photos

Any fire-and-brimstone preacher who has longed to purify the earth of sinners will sympathize with preacher Jimmy Current (Chris Sarandon), who has gained control of a bevy of vampire beauties and is now the de-facto owner of a combination bordello and slaughterhouse for sinners. However, when the brother of Katherine Verdoux (Erika Eleniak), one of his strongest supporters, gets sucked in, his carefully designed setup begins to unravel. Katherine has hired Rafe Guttman (Dennis Miller) to find him. Fans from the HBO television series will recognize their old friend, the Crypt Keeper, and rejoice in his bad puns. This movie keeps up the tongue-in-cheek/maximum gore tradition of the series, and Whoopi Goldberg makes a brief (unbilled) appearance.

John Kassir
as voice of The Cryptkeeper

Sheila Mills
as Bride of Frankenstein

Whoopi Goldberg
as uncredited
View All

Critic Reviews for Tales from the Crypt Presents Bordello of Blood

Adolescent boys might groove to the mix, but most other ticketbuyers will avoid this tawdry opus like the plague.

Triple the length of its cable television inspiration, Tales From the Crypt Presents Bordello of Blood is triple the gore, triple the naked women, but not, alas, triple the fun.

What it lacks in irony and suspense, Gilbert Adler's Tales From the Crypt Presents Bordello of Blood makes up for in whimsy and cheeky self-assurance.

... a macabre, jokey affair that could give Buffy the Vampire Slayer a run for its money as the silliest undead story of the decade.

Vampires aren't the only things in Bordello of Blood that can't stand up to daylight. Neither can the plot.

... never quite reaches the breathlessly mediocre heights of its predecessor, Demon Knight.

The bloodshed, though graphic, is thoroughly creative, utilizing fake appendages and prosthetics - and other mutilative yucks - for successful outrageousness.

In the history of active sabotage, this one's right up there.

It's by no means a good film -- really, it's Dennis Miller versus undead prostitutes -- but b-movie fans shouldn't overlook it just yet.

Bordello of Blood proves to be a tough slog, with a workable premise defeated by clumsy plotting and miscast actors. And no one is more ill at ease than lead Dennis Miller.

Works best as religious satire, but never quite takes off as a mystery or a tale involving bloodsuckers.

Audience Reviews for Tales from the Crypt Presents Bordello of Blood

Fletch in From Dusk Til Dawn, the deadpan comedian Dennis Miller mugs and chuckles his way through Bordello of Blood, the second theatrical feature from the Tales from the Crypt namesake. To be fair, it's sadistically funny, liberally heart-soaked and unapologetically fun. After a mock-epic Raiders of the Lost Ark cliffhanger opening, the pun-filled Cryptkeeper introduces us to tonight's "tawdry tale". Miller might not be a convincing Sam Spade detective but the Weekend Update anchor is self-aware of the dregs he is in and openly lampoons it from within with his ad-libs ("You're looking pretty cool, man. You must know Mickey Rourke."). My favorite interaction is when Rafe (Miller) is interrogating some barflies about a missing person and he is criticizing their billiards skills. Even funnier is William Sadler's pre-credits cameo as a mummified British director who is pitching the film to the disingenuous Cryptkeeper. The wraparound segment is Sadler's Russian Roulette of body appendages with him. Surprisingly, Angie Everhart is lusciously unbridled as Lillith, the matriarch of the vampires. In gowns and flawless makeup, she is a bombshell with fangs. From bloodsucker flicks of yore, Corey Feldman and Chris Sarandon align themselves inside this decadent treat. More naked flesh than a Russ Meyers film, the brothel is a recreation hall of carnal visions. The prosthetic work is also cutting-edge with Gene Simmons tongues, blood-bladder explosions and feral transformations. It's a shame that the Tales from the Crypt brand deteriorated shortly after this release because their alchemy of horror, religious parody (Sarandon's teleprompter-assisted evangelist) and yuk-yuks was choice. In the age of 90's nostalgia, maybe it will be revitalized as well.

Another tongue in cheek blood 'n' guts rampage this time including lots of tits 'n' ass too...so its pretty darn good then. An unoriginal vampire tale this time, set in a brothel with lots of ladies eating biker types much like 'From Dusk Till Dawn' or 'Vamp' but nowhere near as good. Plot is pretty standard but like the previous Crypt flick is does have a wonderful array of makeup and prosthetic effects all over the show with blood squirting and fangs flying, nothing you haven't seen before but it looks good. Casting is drab but does include 80's horror comedy star Sarandon and 80's teen star Feldman both of which raise the film slightly, Angie Everhart looks delicious as 'Lilith'. You know what your gonna get with this franchise so your either gonna love it or hate it. Personally I view these films as a great opportunity to see fantastic examples of hands-on horror makeup effects, normally without much CGI, plus they are always good fun on a no-brainer level.

A mediocre horror comedy with bad acting, Bordello of Blood is a lacking vampire yarn that has a good idea ruined with a terrible cast. This is a pointless attempt at a horror comedy, and the result is a mediocre film that is not memorable whatsoever. The film has really no meaning, and as a vampire film it fails. This film proves yet again that Dennis Miller plainly sucks. The film tries to be something entertaining, and sometimes it does work, but we see that the cast and filmmakers are trying to make something that really doesn't work well. The film is a poor attempt at a vampire tale, and it's quite forgettable. I really didn't enjoy this film, and I can name many other vampire films that are better than this one. Bordello of Blood is a forgettable horror comedy that is poorly crafted with minimal to no scares, and relies more on the gore factor to create horror. As far as vampire films are concerned, Bordello of Blood belongs in the same category as Twilight and all, the other failed vampire films. I lost interest in this film, and I thought it was a pretty lame film with no redeeming factors. Dennis Miller is terrible, and I don't even know why they asked him to be in this, I guess it was to make it entertaining. Well, this film is quite frankly a missed opportunity at being an entertaining vampire film. Boring, uninspired and bad, Bordello of Blood won't appeal to die hard vampire film fans. I was very disappointed with this one. Considering the casting of Chris Sarandon from Fright Night, I was expecting something great, instead it was a boring film.

A cool vampire movie from Tales from the Crypt, it's like an episode of the show, but longer. It has a nice cast, it's funny, and my favourite of the movies based off the show.

Tales from the Crypt Presents Bordello of Blood Quotes