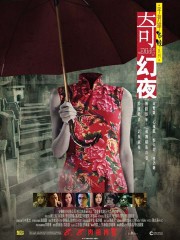 Tales From the Dark 2

Tales From the Dark 2 Reviews

Super Reviewer
Jesse O
½ March 5, 2016
This is an anthology film featuring three segments called Pillow, Hide and Seek and Black Umbrella. Since there is no description, Pillow sees a woman who accidentally murdered her boyfriend being buying a haunted pillow (yes), Hide and Seek sees a group of students being haunted by the ghosts of students and teachers that died in their old primary school and Black Umbrella sees a cannibal trying to live a good life performing good deeds being drawn back in to his more violent habits by a prostitute trying to scam him and using her john to threaten him. Normally, with three shorts, I'd usually review each segment individually, but I don't have enough time and I want to get this review done, since it's been close to three days since I watched this movie and I just wanna get this out of the way. This actually isn't a bad collection of shorts. None of them will truly scare you, but I did appreciate how two of them, at least, relied heavily on atmosphere to get its point across. Black Umbrella is, obviously, the one that relies the most on blood and guts. From a visual standpoint, of course, Black Umbrella is clearly the most memorable of them all. Just the entire visual of the cannibal feasting on the prostitute and completely dismembering her john, you see the aftermath and not the act itself, was really something else. As far as quality, though, it's not the best short of the film. I think that would have to go to Hide and Seek, which is, really, the most traditional of all of the film's segments. I just liked how it flowed and the atmosphere it built up. There's nothing really special about it, it is your traditional ghost story, but I think that it's the best of all the film's segments. The first one Pillow is probably the most creative one, but, really, it might actually end up being the weakest. It's not bad at all, but it just didn't really do much for me. I liked the concept, like the idea that this pillow contains, in the lead's dreams, the vengeful ghost of your boyfriend, who you accidentally murdered, having sex with you in your dreams until you die in real life (yes, again). But it just wasn't as strong as the other two segments in the film. Again, not bad, just didn't really do much for me. Really, this anthology suffers from the problems inherent with this kind of film, and that is inconsistencies. I will say, however, that, at the very least, this movie isn't as inconsistent as others in the same vein. It might not be a good movie, but it offered some enjoyment. Horror nerds might not love it, but I think they'd at least appreciate the effort. Average film here.

Joel M
November 21, 2013
6/10: 100% better than its predecessor. All 3 stories directed by Gordon Chan, Lawrence Lau and Teddy Robin are better than the first parter. Better storyline, better cinematography and it's much more scary.

Ming Siu G
August 21, 2013
Gordon Chan's first segment is the strongest, with fine (some may say daring, but since I'm used to European standards of nudity, NAH) performances from Fala Chen and Lam Kar Tung. It gets a little obvious, but has really interesting cinematography. Segment 2 is full of cheap scares and not much sense at all, but isn't as bad as Simon Yam's in the first installment. Segment 3 is ok, rather mediocre as it goes. As in the first, the "moral of the story" text is insulting as hell.
Page 1 of 1