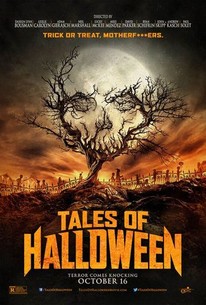 Critics Consensus: Tales of Halloween boasts a number of fun scares and is overall more consistent than many horror anthology films, even if it isn't quite as dark or nasty as the classics of the genre.

Critics Consensus: Tales of Halloween boasts a number of fun scares and is overall more consistent than many horror anthology films, even if it isn't quite as dark or nasty as the classics of the genre.

Critic Consensus: Tales of Halloween boasts a number of fun scares and is overall more consistent than many horror anthology films, even if it isn't quite as dark or nasty as the classics of the genre.

Keir Gilchrist
as The Stranger

Clayton Keller
as Alien
View All

News & Interviews for Tales of Halloween

Bridge of Spies Is Certified Fresh

View All Tales of Halloween News

Critic Reviews for Tales of Halloween

As anthologies go, this one is a heck of a lot of fun, even the misses having a spunky, go-for-broke attitude worthy of going a tiny bit crazy for.

While it pales in comparison to such horror anthology predecessors as Tales from the Crypt, Asylum and Creepshow, Tales of Halloween offers enough minor diversions to make it enjoyable late-night viewing.

There is a kind of cheerful innocence and simplicity to these stories that will endear them to their target audience.

"Tales of Halloween" is full of great fodder for urban legends, and that's about as sophisticated as most of the film's 10 scary vignettes - all set in a suburb on Halloween night - get.

A collection of 10 macabre miniatures that are disposably diverting at best and execrable at worst, despite the participation of some familiar genre faces and directors.

Consistently entertaining - enough to make it a favorite among genre fans.

Hearing the sultry Adrienne Barbeau (channeling DJ Stevie Wayne from The Fog) introducing each story while appearing in none of them is the biggest offense among many.

It makes for an excellent party movie as there is something for everybody and the stories are short and fun.

Overall, Tales of Halloween is a feast of autumnal goodness for lovers of witches, ghosts, and pumpkins.

Tales Of Halloween isn't just the best anthology film in years, it's one of the best horror movies of the year in its own right.

This is short, mostly smart and funny horror that will be especially resonant for the kind of independent fare that felt like it was a lot more readily available back in the Seventies.

Audience Reviews for Tales of Halloween

A rather lackluster horror anthology, Tales of Halloween is a little light on scares. The film follows several stories that take place on Halloween night involving deranged killers, demons, aliens, witches, and other creatures of the night. Featuring Greg Grunberg, Lin Shaye, Grace Phipps, John Savage, and Adrienne Barbeau, the cast isn't too bad. Some of the stories are quite imaginative, while others are cliche and predictable. The gore is fairly tame and the horror isn't all that frightening; though this is partly due to the low budget, which shows in the sets and makeup. Tales of Halloween is kind of an amusing and clever film, but doesn't really deliver that many chills.

Really fun anthology movie, though granted I was expecting a total mess like the VHS series.

Goddamnit, why couldn't have this movie been available on Netflix on Halloween night. It would have been a perfect end to my horrorfest this year. That doesn't actually matter to any of you, but still. And I'm not even say that because I thought this film was great because, if you look at the rating, I didn't even think it was good. It's just that the movie has a certain B-movie charm that would have made this a blast to watch the last day of October. That's just me. But, much like almost every anthology film out there, specifically ones that delve into horror, there's a lack of consistency between each short. And with this film covering 10 segments, some of these really are criminally short and undeveloped too. There's a short called Grim Grinning Ghost that ends out of nowhere. There's a jump scare and then they go to the next short. It was so bad that I actually thought it was a continuation of the Ghost short, but the jump scare was actually the end of it. The Grim Grinning Ghost isn't one of the best segments of the film if I'm being honest. The one prior to the Ghost one, The Weak and the Wicked, also feels undeveloped. And I guess I can't blame them, considering the fact that they didn't have a lot of time to work with, but there were several others segments of the film that were enjoyable even with the time constraints. I'm not even gonna bother going through them individually, there's 10 of them and they're so short that doing a review for each one would probably mean that I'll just write a sentence or two. And the two shorts I just mentioned aren't even some of the weakest in the entire film. There's this one that has two neighbors getting into a fight over who has the better Halloween decorations. This one really did nothing for me and it added nothing to the film at all. Thankfully, though, I think the best really is saved for last. At least the last three shorts of the film were the strongest. We start off with Friday the 31st, which sees this deformed man, think like a Jason Voorhees-type, fighting with an alien that inhabits the body of one of the man's victims to fight with him since he doesn't have any candy. I like the subversion of the slasher tropes and it's certainly a bloody, and gory, good time, emphasis on the blood and gory. The next to last short, The Ransom of Rusty Rex, is far more comedic in tone. These robbers kidnap this man's son only to find out that it's not actually his son and it's a creature that never wants to leave anyone's side. The horror in it might not actually be great, but I found it one of the more entertaining parts of the entire film. And the last one, Bad Seed, sees a genetically engineered pumpkin terrorize the town. Yes, it's probably the most out there segment of the entire film, but it also entertained me because of its absurdity. Those aren't the only three segments of the film that are good, but they're the best the film has to offer. I thought Ding Dong, about a man who tries to put a stop to his child-eating wife, who's a witch. It's obviously inspired by Hansel and Gretel, but it's a solid enough segment on its own right. Trick, in which a group of people are killed off by trick or treaters is solid enough as well, but nothing really all that special. The reveal at the end of that short was the best part of it. The rest of the other segments are far more middle-of-the-road and I don't want to go over them, just to keep this review as concise as possible. Looks like I haven't done a great job at that, if we're being honest. The thing about this movie is that it reminds me of a vastly superior anthology horror film, Trick 'r Treat. The concept it is fairly similar, a series of strange events happen in this town on Halloween night. But, and as I mentioned, Trick 'r Treat is a considerably superior film. With that said, I felt the last three shorts of the film were quite good and two others were solid. That's five of 10. The other five didn't do much for me. So, as if it wasn't obvious already, this movie is a mixed bag. It has a B-movie charm, for sure, but the fact that half of the movie isn't interesting enough keeps this from being elevated to a good level. The quality of the other five shorts isn't enough. You're only as strong as your weakest link. And there are five weak links here. Goodbye. How's that for a dated reference? With that said, even with some of the weak shorts, there's some enjoyment to be had if you watch this with a group of friends on Halloween night. This is decent at best.