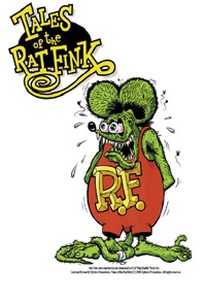 Tales of the Rat Fink Photos

Ed "Big Daddy" Roth was a genius of outlaw art who took America's obsession with all that is fast, loud, and streamlined and built it into an empire. In the 1950s, Roth was a hot-rodder who moved from bodywork and helping guys fine-tune the look of their jalopies to building unique custom machines. Roth threw out the rule book of conventional automotive design and created fantastic visions of chrome, fiberglass, and supercharged engines that took one of America's most conventional consumer items and turned it into a freaked-out vision of post-adolescent cool. Roth was also a gifted cartoonist, and along with his cars he also created freaked-out automotive cartoons that made the artwork in Mad Magazine look sedate; his trademark character was Rat Fink, a maniacal, grinning rodent who was usually seen popping the clutch behind the wheel of one of Roth's outlandish cars. Between Roth's crazed automobiles, which drew thousands of fans to auto shows; the reproductions of them (in the form of model kits), which sold in the millions; and the Rat Fink and Monster T-shirts (which are still on the market today), Roth was one of the most influential figures in popular culture in the 1960s, and Tales of the Rat Fink is a documentary by Ron Mann that features interviews with Roth's friends and fans as well as animated sequences that bring his cars and creatures to life onscreen. John Goodman, Tom Wolfe, Brian Wilson, Matt Groening, Jay Leno, and Ann-Margret are among those who contributed their voices to the project; acclaimed indie rockers the Sadies composed and performed the musical score.

Robert Williams
as The Outlaw

Billy Gibbons
as The Beatnik Bandit

Brian Wilson
as The Surfite

Matt Groening
as Finkster
View All

Critic Reviews for Tales of the Rat Fink

Audience Reviews for Tales of the Rat Fink

There are no featured audience reviews yet. Click the link below to see what others say about Tales of the Rat Fink!

Tales of the Rat Fink Quotes