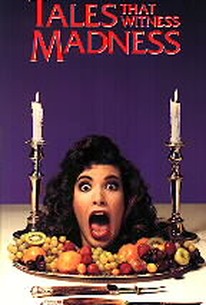 Essentially a reworking of their earlier omnibus Asylum, this is another anthology of pulp horror tales from Amicus, this one helmed by the ever-reliable Freddie Francis. It features a quartet of eerie vignettes involving four patients in the care of psychiatrist Dr. Tremayne (Donald Pleasence), who is attempting to justify his strange theories to a colleague (Jack Hawkins, who died shortly after his scenes were filmed) by explaining the horrific events that drove the patients to their current state. The first tale centers on a young boy (Russell Lewis), whose parents' constant squabbling prompts him to conjure an imaginary tiger to devour them. The second involves a Victorian-era bicycle which allows its finder (Peter McEnery) to travel back in time and live as his own ancestor. The goofy third chapter pits a jealous wife (Joan Collins) against a strange rival for her husband's attention: a tree possessed by a human soul. The final segment stars Kim Novak (a last-minute replacement for Rita Hayworth) as a literary agent who must sacrifice her own daughter (Mary Tamm) to appease the restless spirit of her client's mother. Although certainly not the studio's best effort, this is still an amusing diversion, featuring the standard twist ending and a flamboyant approach suggestive of EC horror comics. ~ Cavett Binion, Rovi

A superior British horror film and one of the finest examples of the multi-story shocker.

It's all very unsatisfying, and baffling to think that this was a big enough project to attract Ms. Novak.

There is no wonder why this is in set collections with Tales From the Crypt, it is just like the set-up of the ghoulish stories in Crypt except with Donald Pleasence in a psych ward going from each seemingly insane patient retelling each of their stories. The stories are just awesome, it ranges from a kid with his imaginary killer "friend" to a Hawaiian party from hell. What I love is that while Pleasence begins their stories the subjects of them seem to be in absolute shell shock murmuring some wort of madness to themselves as he begins each tale. 4 out of 5, it's campy but satisfying as all hell.