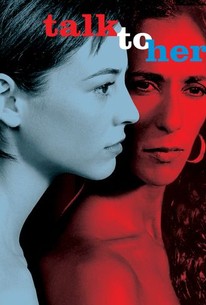 Talk to Her Photos

Pedro Almodóvar follows his international success All About My Mother with an offbeat drama that explores the friendship of two men brought together under unusual but strangely similar circumstances. Benigno (Javier Camára) is a male nurse whose apartment overlooks a dance studio run by Katerina (Geraldine Chaplin); he often sits on his balcony and watches one of Katerina's students, Alicia (Leonor Watling), and he finds himself becoming infatuated with her. When Alicia is severely injured in an auto accident that leaves her in a coma, Benigno discovers she has been admitted to the hospital where he works, and he spends his days caring for a woman he now deeply loves but has barely met. Marco (Darío Grandinetti) is a journalist who was assigned to interview Lydia (Rosario Flores), a well-known female bullfighter whose on-the-rocks romance with another toreador, "El Niño de Valencia" (Adolfo Fernández), has made her the focus of the tabloid press. During Marco's interview with Lydia, he goes out of his way to treat her kindly, and she appears to return his attention. During the bullfight which follows, Lydia is gored by the bull, and is now in a coma; Marco is certain his interview broke her steely concentration, and he spends most of his days at the hospital, convinced her injuries are his fault. Alicia and Lydia are both housed in the same ward of the same hospital, and in time Benigno and Marco become close friends, bonding in their shared devotion to women who cannot return their affection. ~ Mark Deming, Rovi

Beatriz Santiago
as Nurse A

Caetano Veloso
as Himself

Mamen Segovia
as Nurse B

Pina Bausch
as Herself

Malou Airaudo
as Herself

Javier Conde
as Bullfighter
View All

News & Interviews for Talk to Her

View All Talk to Her News

Critic Reviews for Talk to Her

Almodovar uses the characters' unlikely predicaments to show how we define ourselves by narration, but his story is so overdetermined that ultimately the two men seem as constrained as their brain-dead sweethearts.

It's Almodovar's most mature and mysterious movie.

It's a brave movie and a mature undertaking.

Good, but not classic Almodovar.

[Has] moments of almost unbearable beauty.

Almodóvar glibly, superficially and without opposition presents contemporary Spain as a series of beautiful images, largely devoid of a social context.

Talk to Her is all about making connections; how we interact with people and the reasons why we make the relationships that we do.

The film sways between different forms of love - from tender, unconditional affection to obsession and mania.

Unfortunately, the Spanish enfant terrible's iconoclastic artistic hysteria never rises to the surface in Talk to Her.

It earns its R rating but it is a thoughtful unique depiction of that line between love and obsession.

Audience Reviews for Talk to Her

It is easy to read this as an insensitive melodrama that uses the suffering of two women to tell a story about the friendship that grows between two men, but the film is actually so much more than that, full of nuances and taking us in many unpredictable directions.

Almodovar is a genius, so enough said? Plot twists are superb. Acting is wonderful. The idea that sex can awaken a sleeping maiden is marvelous--the idea that you can love someone in a totally one-sided relationship is....scary. But see it once, and see it several times to get everything out of it. It's a nice discussion on what romantic love really is.

One of the best movies i've seen in a while. Great story, great acting. Pathos out the yingyang.

Talk to Her Quotes