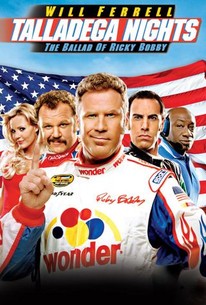 When America's number one NASCAR speed-demon is issued a direct challenge from a gay, French Formula One racer with a hunger for the top spot and a mean talent for tight-cornering, the race is on to become the number one man in all of NASCAR in a full throttle comedy starring Will Ferrell and directed by Anchorman cohort Adam McKay. Ricky Bobby (Ferrell) is a national hero with a "smokin' hot" trophy wife, pair of borderline-abusively precocious sons, and an endless line of endorsement deals filling his mansion with toys and driveway with sports cars and Hummers. His racing partner and lifelong friend Cal Naughton, Jr. (John C. Reilly), never fails to provide him with a hand on the racetrack, frequently performing their trademark "slingshot" maneuver to shoot Ricky into first place, leaving Cal in second. While the public loves these buddies (popularly known by the meaningless childhood nicknames they find so exceedingly cool: "Shake and Bake"), a wedge comes between the two, as Ricky Bobby's longstanding winning-streak is broken by flamboyand French Formula One driver Jean Girard (Sacha Baron Cohen), robbing Ricky of everything in an instant as the trauma leaves him unable to drive. Ricky's wife takes his fortunes while Cal takes his wife, and now he's back with his mother (Jane Lynch) and long-estranged father (Gary Cole). Things look bad for Ricky, but his father was once a race car driver himself, and now with the help of a training montage, a live cougar, and the courage to drive without his gleaming white Wonder Bread endorsement, Ricky might be ready to face the track again. ~ Jason Buchanan, Rovi

Will Ferrell
as Ricky Bobby

Elvis Costello
as Himself

Yasiin Bey
as Himself

Darell Waltrip
as Himself

Benny Parsons
as Himself

Wally Dallenbach
as Himself

Dale Earnhardt Jr.
as Himself

Dick Berggren
as Himself

Mike Joy
as Himself

Larry McReynolds
as Himself

Jamie McMurray
as Himself

Bob Jenkins
as Himself

Bill Weber
as Himself

Critic Reviews for Talladega Nights: The Ballad of Ricky Bobby

A comedy with horsepower to spare.

Playing to his strengths, star and co-writer Will Ferrell reaps many good comic moments early on in Adam Mckay's feature to compensate for a sluggish second half.

The disappointment of this movie is not that we don't see enough of Will Ferrell. It's disappointing because what we do see, we've seen before, and better.

Broad but not crude, dumb but not witless, clever but still snot-spittingly funny. Stupidly brilliant, in other words.

An inane parody of a triumphalist celebration of all-American sporting heroism.

Probably best viewed with a six-pack on hand.

We are facing an attractive comedy, fresh and summery, with memorable moments. [Full Review in Spanish]

Has no idea when a joke has gone on too long.

Talladega Nights holds up well, thanks to a clearly improv-first on-set culture.

In the 2000s, Will Ferrell had an enviable run of hit comedies. To my mind, Talladega Nights: The Ballad of Ricky Bobby is the funniest of the batch.

It's also a typical Ferrell vehicle, meaning it has his usual flat delivery and inside jokes. This particular style of comedy is odd, it's slow, it's kind of dumb and people seem to love it.

Audience Reviews for Talladega Nights: The Ballad of Ricky Bobby

To me NASCAR is one of the most boring things to watch, but the movies on racing and NASCAR are awesome, and this movie is definitely no exception, in fact, I'd say its one of the funniest and best racing films of all time, and one of the funniest movies of Will Ferrel's carrier. To me everything in this film works, the timing of the lines, the jokes are all hysterical, the acting is fun and entertaining, and some of the racing is pretty entertaining. Sacha Baron Cohen as always is fantastic, though I wish I could here what he actually sounded like rather than an accent like in every movie he is in. This is also to me one of the most quotable comedies of all time, my favorite line being by Cohens character "Hakuna Matata, BEETCHES."

A film with just as much obnoxious hysteria than the main character. Will Ferrell provides a flavorful laughter that sticks to you no matter the amount of random-pun it may present. The enticing blend of comedy and racing is an excellent motion picture that reaches the finish line in grand fashion. 5/5

Ferrell films can vary from one end of the scale to the other, he can be funny and ingenious or a complete annoying twat, unfortunately many of his films do come under the 'annoying twat' label for me. This is not funny, Ferrell's worst by far, it may be because car racing just isn't a great source material for a comedy, I dunno. Cohen is very good as the French racer, he comes across quite well, almost like a kind of dastardly Disney baddie in the realms of 'Thorndyke' in 'The Love Bug' but the rest is just silly and simply unfunny. The characters are all rather un-likeable too, it just seems Ferrell is trying to make a comedy out of every 'sport', and this isn't even an interesting 'sport', NASCAR is dull dull dull if you ask me, but I am British, if you like this type of racing you may like it.