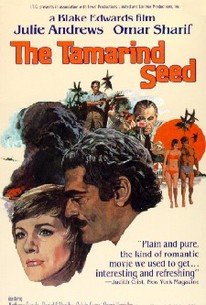 Blake Edwards's stylish direction bolsters this Cold War romance starring Julie Andrews and Omar Sharif. Andrews plays Judith Farrow, a British civil service functionary who meets dashing Russian agent Feodor Sverdlov (Omar Sharif) under the romantic skies of the Caribbean. The Caribbean breezes work their magic and soon Judith is head-over-heels in love with Feodor. Feodor then tries to enlist Judith to become an agent for the Soviet Union. But after Judith is warned by the British government to stay away from him, Feodor decides that he'd rather have her than the Soviet Union. However, a kink is thrown into their love affair when an undercover Russian secret agent, posing as a British agent, decides to eradicate the two lovers.

Critic Reviews for The Tamarind Seed

Before long, The Tamarind Seed turns into a very icky movie.

Audience Reviews for The Tamarind Seed

Some good twists and John Barry's beautiful score are the highlights of this slow, old-fashioned romantic spy thriller.