Tammy and the Bachelor1957 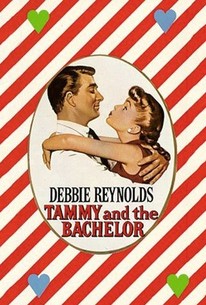 Tammy and the Bachelor Photos

Debbie Reynolds stars as Tammy in this romantic comedy of a country girl living in the South who cares for pilot Peter Brent (Leslie Neilsen) after his plane crashes near her home. At the beckoning of mutual admiration, Peter soon invites her to his plantation where she charms the fancy-shmancy attitude out of his family and transforms the whole place into virtual sweetness and sunshine. Tammy and the Bachelor presented the original song Tammy by Ray Evans and Jay Livingston, which gained the two an Oscar nomination for Best Song and became a hit song for Reynolds. Tammy Tell Me True (1961), Tammy and the Doctor (1963) and Tammy and the Millionaire (1967), as well as a television series, all were spun from this film.

Lillian Culver
as Woman at exhibition
View All

Critic Reviews for Tammy and the Bachelor

To implement a plotline like this would take a skillful and charmingly stylized script and some sharp direction. But both are routine.

[A] modest but utterly charming piece of whimsy.

A "wholesome" but corny comedy-drama...

Audience Reviews for Tammy and the Bachelor

Sweet film with Debbie exuding mountains of charm, while she's not the whole show it would be nothing without her. The theme song and her sweet if not terribly remarkable voice are a perfect match. The rest of the cast is fine with Leslie Nielsen young and strapping. Mildred Natwick is terrific as the slightly loopy Aunt Renie.

I liked this movie, it was fun. It's not great, but I liked it anyway.

Tammy and the Bachelor Quotes