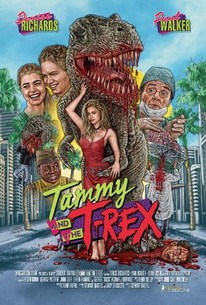 A jaw-dropping assault on the senses from the whacked out mind of cult filmmaker Stewart Raffill (The Ice Pirates, Mac & Me), TAMMY AND THE T-REX features Denise Richards (Wild Things) in her first starring role, along side Paul Walker (The Fast & the Furious), Terry Kiser (Weekend at Bernie's), George 'Buck' Flower (They Live), and John F. Goff (Drive-In Massacre). Primarily seen in its heavily censored, PG-13 rated version, Vinegar Syndrome brings TAMMY AND THE T-REX to Blu-ray from a 4k restoration, fully uncut for the first time on home video, with all of its gross-out gags and gratuitous decapitations, gut rippings, and head smashings, courtesy of special effects wizard John Carl Buechler (Mausoleum), completely intact.

Critic Reviews for Tammy and the T-Rex: Gore Cut

'Tammy and the T-Rex' is one of those films that you have to see to believe, with friends and a barrel of beer, and that makes you reconsider the Kamikaze humor of director Stewart Raffill. [Full Review in Spanish]

Tammy and the T-Rex is stupid fun. I've been a bit glib in this review, but I unabashedly enjoyed this movie.

Ludicrously, brilliantly weird; a "bad" movie that, by embracing its campy tone and demonstrating a slight-but-significant self-awareness, is really anything but.

You're watching Tammy and The T-Rex with a room full of friends, additional substances to ease out forthcoming giggles, and hunger for "so bad it's good" cinema on an inconceivable level.

The cult entertainment level of Tammy And The T-Rex is simply off the charts.

There are no featured reviews for Tammy and the T-Rex: Gore Cut at this time.