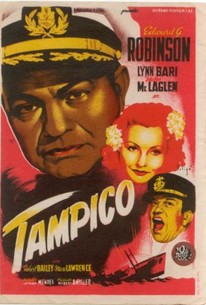 Not to be confused with the 1971 film of the same name, this World War II espionage drama was the second to last film from German director Lothar Mendes and stars Edward G. Robinson as oil tanker captain Bart Manson. When Manson rescues the survivors of a torpedoed ship in the Gulf of Mexico, he meets the beautiful Kathy Hall (Lynn Bari) and the two fall in love. But when Manson's ship sinks under suspicious circumstances, Hall becomes the prime suspect due to her mysterious past and identity. Believing his beloved to be innocent of the crime, Manson sets out to uncover who the real culprit is. Tampico also stars Victor McLaglen and Robert Bailey.

Antonio Moreno
as Justice of the Peace

Virgil Johanson
as Seaman
View All

There are no critic reviews yet for Tampico. Keep checking Rotten Tomatoes for updates!

"Loose lips sink ships" Edward G. Robinson and Lynn Bari are unlikely lovers in this maritime espionage thriller set in coastal Mexico. A likable film that seems hampered by the contrived chemistry between the two leads. Adequate but unexceptional.