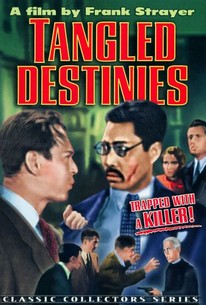 Produced at the little Tec Art studio by sound engineer Ralph M. Like, this film is one of those modest whodunits where the lights go out and someone inevitably gets hit over the head with a blunt instrument. This time, the crew and passengers from a Los Angeles-bound plane seek shelter from the fog in a deserted yet fully furnished farm house. As it turns out, one of the passengers (William P. Burt) is carrying diamonds worth $500,000 and is killed during one of the blackouts. Insurance investigator Sidney Bracey attempts to catch the killer before he strikes again, and with the assistance of the plane's captain, Gene Morgan, and elderly passenger Ethel Wales, he manages to unmask the surprising culprit. Aside from being practically devoid of the obnoxious "humor" that often makes this kind of hoary melodrama tough viewing for a modern audience, Tangled Destinies offers generally fine performances from an ensemble cast of B-movie veterans and better than average production values.

James B. Leong
as Ling

A pretty good mystery movie for a low budget 1930s movie, not exceptional but above average.