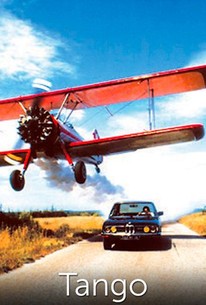 If such a thing as gentle humor can be wrung from murderous misogyny, this all-star comedy is the embodiment of it. The basic point of the film seems to be this: unattached men long to live with women, and once they do, they long to live without them. In this story, Paul (Thierry Lhermitte) is upset about his wife's having left him. He can't stop thinking about her, and eventually decides that he'd be much happier if he knew she was dead. Then, he thinks, he could put an end to his obsessing. His uncle, a judge (Phillippe Noiret), knows of a man who killed his wife more or less on purpose, and got away with it. Paul and his uncle get together with the lucky killer, Vincent (Richard Bohringer), and, on their way to visit Paul's wife, discuss how Vincent managed to kill his wife and get away with it. Along the way, the aggravations women bring to men are pretty thoroughly (and humorously) hashed over.

There are no featured reviews for Tango at this time.