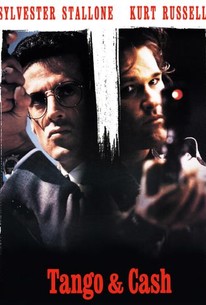 Sylvester Stallone and Kurt Russell star in this Hollywood buddy actioner about two competitive police officers in Los Angeles. Tango (Stallone) and Cash (Russell) are put on a case to topple Californian drug lord Yves Perret (Jack Palance). Working together reluctantly, as each considers himself to be the best at what he does, the self-involved detectives are framed by Perret and imprisoned. While there, they must work together in order to escape and clear themselves of any wrongdoing. Though there is much rivalry between the two cops, they succeed in escape and again go after the baddie, but this time with a more convincing and concerted effort.

Tamara Landry
as Girl in Bar

Anna Joyner
as Girl in Bar

Ron Cummins
as Customer
View All

Five Favorite Films with Ted
One-Armed Push-ups All Around in Honor of Jack Palance
"Apocalypto" Apocalypse?

'Tango & Cash' turns 25 years old next month, which means if it were a person, it'd be right around the right age to start realizing what a stupid movie 'Tango & Cash' is.

The jokes seem lame and the rivalry fraudulent, as the two boys play with their big guns.

The film looks like the sort of queasy fever dream that might be produced by sitting through an entire Orson Welles film festival while eating pepperoni pizzas.

Both men think that the best way to deliver the right to remain silent to the usual suspects is via a right hook.

Tango and Cash is a waste of talent and energy on all levels: unworthy of Konchalovsky, unworthy also of Stallone, Russell and every superior technical credit on the film.

The ostensible humor here is of the macho one-liner variety, and much of it falls flat.

Stallone and Russell are entirely watchable as two larger-than-life juggernauts portraying the same cheeky tough-guy characters they always play in their actioners.

That 'Tango & Cash' was an undeserved testament to the action cinema of the eighties is evidence that the implacable judge called time has revealed it in a more than painful way. [Full Review in Spanish]

It is impossible not to see a film that, voluntarily or involuntarily, is placed under the advocation of the comical and James Bond. [Full Review in Spanish]

Despite imaginative sets and bursts of action -- the prison scenes are particularly vividly staged -- this is a fitfully boring film with perished elastic in its would-be whiplash dialogue.

...an ineffective misfire that surely looked a whole lot better on paper.

Think Hope & Crosby (on a so-so day) as over-posturing late 1980's L.A. cops. There is no believability to speak of and so forget about that. Put it out of your mind. Just watch these knuckleheads try to out macho the other. Then it's sorta alright.

It's a completely outrageous buddy cop movie that throws its characters in the oddest places. It goes from a chaotic, futuristic prison to a monster truck derby. What makes it fun is Kurt Russel and Sly Stone being a hilarious team. You have to enjoy all the corny jokes and cliches because it's all in good fun. This is just a fun movie, it makes fun of itself constantly and lets you enjoy its kooky nature. It's the definition of an 80s movie and completely harmless.

One of the special action movies of the 90's, this one is special because it reignited the buddy cop movies and had a rapid fire script with plenty of gags.... not to mention Stallone and Russell pulling it off as slick as racing flats on a wet track. Though I will say a lot of the action was recycled from my NO.1 Movie, J.C.'s Police Story, it was entertaining nonetheless, especially Kurt who I think stole the show with his wild boy antics and the drag scene. XD Anyways, Tango and Cash, two polar opposites in character, 100% identical cops, LA's Finest, gets set up by a group of drug dealers who've had enough of their successes. Copping an early plea of guilt to avoid the maximum sentence, both blue light specials find themselves in Hell, and as we all know, cops in prison is like being a snowball in Hawaii.... no chance. But of course, its Sly and Kurt here, two prime beefsteaks of the Golden Age of Action, and yeah ladies, you do get to see a lot of their backsides and such, so the movie is friendly for women. XD But the boys get a young Teri Hatcher, and boy was she the bomb back in her day. Well, now she's supposed to be a milf, but guys like to dream right? XD So, not much in direction, it did move around like a door missing a few hinges, but the script and the action was in your face and enjoyable. Even the courtroom scene was prime, Kurt surprisingly saying "eloquent" and everyone looks at him thinking "He knows how to say eloquent?".... then a few minutes later screaming out "THIS IS FUCKED UP" and getting all the cheers from the cops. The we have a modified RV assault vehicle, , monster trucks and things that go booom with spectacular results. Well.... why not? there's plenty of other ways to waste time, but this is one of the best.