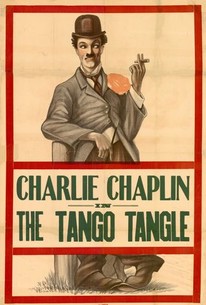 Tango Tangles is an impromptu Keystone comedy which exploited the current "tango craze." A tango contest and exhibition prompted Mack Sennett to send a crew out to a local dance hall where some of the film was shot. Charlie Chaplin appears in a tuxedo, sans the famous Tramp makeup and costume, as a drunk who flirts with the hat-check girl, and he gets into fights with Ford Sterling and Roscoe Arbuckle, both musicians at the dance hall who are also enamored with her. Although slight in plot, the film is interesting because the three principal Keystone actors appear without comic makeup and because the audience can observe the mirthful reactions of the real dancers in the hall to the comic fight between Chaplin and Sterling. Also of interest is the blending of location and studio footage, noticeable due to differences in lighting and set.

Hank Mann
as Guest in Overalls

There are no critic reviews yet for Tango Tangles. Keep checking Rotten Tomatoes for updates!

There are no featured audience reviews yet. Click the link below to see what others say about Tango Tangles!