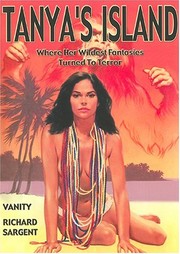 Bill B
August 15, 2012
I must rate this as awfully as it deserves, but if you've got any interest in seeing Vanity naked, you owe it to yourself to own a copy of this, because Jesus H. Christ, is she naked in the majority of the film. She may've gone all Jesus-y on us in her later life, but God bless her for leaving stuff like this for us to enjoy from her sinning days. A woman stranded on an island finds herself in a weird ass love triangle with her douche-y boyfriend and an ape, which quickly escalates to violence and jackassery.

It's pretty amusing for being such a poor production, that's for sure.

Tico P
December 10, 2010
Okay. Where to start here? Beauty and the Beast VS Gigantic Ape in love?

Plot: Tanya and her boyfriend Lobo decide to move to and isolated island far away from modern civilization. They are both convinced this will be their garden of Eden. Lobo and Tanya are in love and happy until one day Tanya observes an ape on the island. Tanya follows the gigantic beast to a cave where it resides.

Slowly they become friends and the ape is friendly and gentle to her. The beast enamors Tanya with flowers and what not. Tanya names the ape Blue. Lobo grows extremely jealous of Blue and forbids Tanya seeing ape ever again. Tanya of course ignores Lobo. Lobo traps Tanya in a bamboo cage he has built, using Tanya as bait. Now it's a war of man VS ape.

I'm sure it sounds silly, and it is. A very thin plot doesn't really matter if you can appreciate rare films like this. I really like this film and it's probably for one simple reason, Robinson Crusoe was one of my favorite books growing up.

There really is no point going into deep analysis to understand this film, nor do you need a PHD as a film expert for this one. Man VS Beast, but is man or ape the real beast here? Finito.

Lobo goes haywire on the island in a typical isolated cabin fever of rage, to protect his Eve/Jayne from the evil beast that has stolen her heart ... whatever.

Still this odd film has a charm that sucked me in from the very start and delivers very decent ape make up. Not a common thing for a cheap film from the 80's. I'm serious when I say the ape make up is very good.

Tanya's Island is one of those weird ones that I used to have on a bootleg VHS I can't seem to find anywhere. I have to get his again in the near future.

It was released the same year as THE BLUE LAGOON, but I don't know which came first. I don't care if it rips off the Brooke Shields film at all. I find Tanya's Island superior with greater entertainment value that lacked in the B LAGOON bore.

It is a fun film to watch with a very annoying protagonist most viewers will dislike.

You'll be surprised to know that Tanya is acted by Vanity of Prince fame. She spends most of the film semi nude, with eye makeup, and jumps around like a silly little tart.

Can you resist this Temptation Island with an ape, a Loco and a naked tart?

If I was on an isolated island with a choice of one item, it would not be this film, or the silly naked little tart. It would have to be Blue because he's so cool, and has a heart.

And no ... I don't have an ape fetish.
And now competition time: BTW, does anybody know what this kind of fetish is called? I most certainly do not.

Todd S
½ February 17, 2010
1980 Canada Director: Alfred Sole
Score: 5
So, uhm, yeah. Let me get his out of the way first. If you like lots of incidental "non-plot-sensical" (yes, it's a word I made up actually, thank you!) nudity, rape, and beastiality, then search no more, this is your movie. I'm just saying. The plot is weak and pretty much an excuse to get the title character naked....all the time...constantly. Fortunately she is a good looking woman, so it's not so bad. It's not so good however that I just forgot that there is supposed to be a story in there someplace and the actors are supposed to help that story along. They don't. They are not very good at acting really...but they ARE good at taking off clothes so I can see how they got the job for this particular movie. The soundtrack is there, but beyond that fact it is not worth further mention. One thing that IS worth mentioning and is one good thing about this movie are the creature SFX. The make up job for "blue" is outstanding. I applaud the SFX folks. So anyway. View at your own peril. I did get a few laughs out of it, I'll admit that, so maybe you will too. Good luck.

Senor C
½ November 19, 2007
Lobo the isolated painter & Blue the red assed/blue eyed ape battle it out to see who will shank Vanity's coffee creamed ass..they both do or was it all just a dream...yukk yukk yukk. Worth it a bit for Richard Sargent bravo performance & Vanity's showing her Toffifee breasts @ just about any given moment