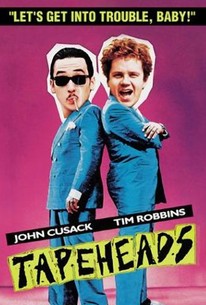 John Cusack and Tim Robbins star as Ivan Alexov and Josh Tager, security officers who lose their jobs and decide to put together their own company producing videos. After taping a bunch of odd assignments including a fluke music video that is tremendously successful, they unknowingly have taken a private video of a politician who hopes for presidential election. This leads to Secret Service involvement, and chaos ensues. Another film, Bob Roberts, is a film spun from the conservative politician/singer character in Tapeheads which also sports Tim Robbins in a leading role. Featuring a healthy soundtrack and cameos of various music-industry celebs, this comedic romp was directed by ex-music video man Bill Fishman.

Keith Joe Dick
as Mr. B

Brian James
as The Blender Children

Bobcat Goldthwait
as Prosperty Through Exploitation Author
View All

A painful attempt to satirize the making of rock videos that runs aground with a puerile plot and bombastic, self-infatuated delivery.

It's all good fun: likeable performances, unpretentious, larky direction, and a haphazard story.

The amiable screenplay by Mr. Fishman and Peter McCarthy is often funny, and never worse than silly.

All of these elements have been lifted off the shelf of exhausted cliches, given a quick dusting, and plugged directly into the movie.

The irony is that nothing Fishman and his cohorts have come up with is really as funny as a two-hour slice of MTV itself.

Ignored both at the cinema and on tape, this is a gem that is as happy sending up the music video world as it is poking fun at politics.

A wacky, high-energy satire of the music business.

It's the kind of harmless breezy film that's easy to take on late night cable TV when you don't feel like using your noodle.

Tapeheads plays with the same kind of off-kilter energy that Repo Man has, but lacks the complete abandon of the former.

I love this movie, and it's virtually unheard of! It has two big stars: Tim Robbins and John Cusack, as two unemployed friends who start a music video production company, and the craziness that occurs along the way. It's really fun and entertaining, and very funny. It's one of my favourite movies from 88.

John Cusak's stash is the funniest thing I've seen on a human being. This movie is another buddy 80's movie and if you don't enjoy those then you probably won't like this. It does have a lot of heart and Mike Myers pretty much stole this idea for Wayne's World and gets ZERO credit.

Great comedy film about 80's music video production. Another good one is "The Big Picture".