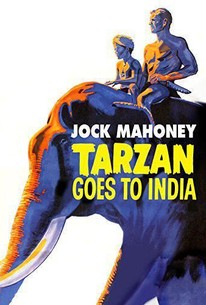 One of a seemingly endless production of Tarzan movies -- still going strong decades later-- this tale by director and co-scripter John Guillermin places the hero in India. Tarzan (Jock Mahoney) is still physically musclebound, but his speech and attitude reflect more of his noble British origins than ape-man behavior. He is called to India to help save the many elephants that are endangered by the opening up of a new reservoir. The reservoir will flood the elephants' home territory, drowning them all. Tarzan not only has to do battle with recalcitrant businessmen interested only in the bottom line, he has to handle recalcitrant elephants as well.

Jai
as The Elephant Boy

Elephant: Gajendra
as Itself

Simi Jai
as Jai, the Elephant Boy
View All

There are no critic reviews yet for Tarzan Goes to India. Keep checking Rotten Tomatoes for updates!

There are no featured reviews for Tarzan Goes to India at this time.