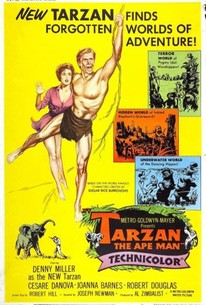 This remake of the 1932 version of the popular jungle adventure features UCLA basketball ace Denny Miller in the title role. His Jane is played by Joanna Barnes. An all-around low-budget effort from MGM, the film is largely comprised of footage from King Solomon's Mines. The film also recycle's the famed Tarzan yell made famous in Johnny Weissmuller's films. This is by and large considered the worst of the Tarzan films. ~ Sandra Brennan, Rovi

There are no critic reviews yet for Tarzan, the Ape Man. Keep checking Rotten Tomatoes for updates!

There are no featured reviews for Tarzan, the Ape Man at this time.