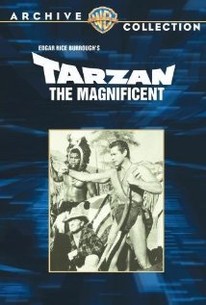 Gordon Scott's fifth and last appearance as Tarzan came in this 1960 installment of the long-running movie series featuring the adventures of the legendary ape man. Neither Jane nor son Boy appear in the film. Tarzan is hired to escort a hardened criminal, Coy Banton (Jock Mahoney), through the jungle so that he can be turned over to the police. Also in the party are a group of British visitors including Ames (Lionel Jeffries), whose wife Fay (Betta St. John) falls in love with the prisoner Banton. Tarzan must stop the jungle party from fighting amongst themselves. After this film, Mahoney replaced Scott as Tarzan in subsequent movies, while Scott made several Italian movies playing the role of Hercules. ~ Michael Betzold, Rovi

Critic Reviews for Tarzan The Magnificient

There are no critic reviews yet for Tarzan The Magnificient. Keep checking Rotten Tomatoes for updates!

There are no featured reviews for Tarzan The Magnificient at this time.