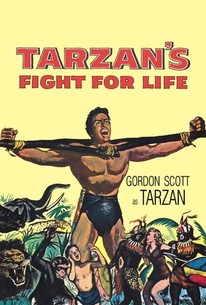 Tarzan's Fight for Life was the last "Tarzan" entry to be produced by Sol Lesser, whose association with the series dated back to 1933; thereafter, Sy Weintraub was in charge of the franchise. Gordon Scott makes his third appearance as the Lord of the Jungle, while Eve Brent costars as Jane (a character absent from the the two previous Tarzan flicks). This time, Tarz comes to the aid of medical missionary Dr. Sturdy (Carl Benton Reid), whose efforts to minister to the natives are being undercut by witch doctor Futa (James Edwards). Relying on superstition and fear, Futa hopes to foment a native riot, despite the more temperate atttitudes of tribal chieftan Ramo (Woody Strode). The climax relies as much on suspense as action, with Gordon Scott doing a little more genuine acting than usual. ~ Hal Erickson, Rovi

All attempts at genuine wonderment seem to have been abandoned...

There are no featured reviews for Tarzan's Fight for Life at this time.