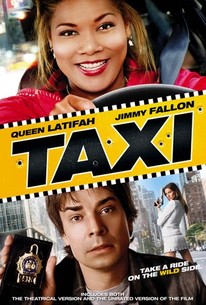 Critics Consensus: Silly and unfunny remake of a French movie of the same name.

Critics Consensus: Silly and unfunny remake of a French movie of the same name.

Critic Consensus: Silly and unfunny remake of a French movie of the same name.

An inept cop suddenly gets a new partner in the person of a cabbie with attitude in this high-rolling comedy. Washburn (Jimmy Fallon) is a police officer who becomes the laughingstock of the department after a series of traffic accidents cause him to lose his driver's license. One day, Washburn gets an urgent call to head out to the location of a bank robbery; unable to drive himself there, he hails a cab. As it happens, the taxi is being driven by Belle (Queen Latifah), a single mom who, after making a name for herself as the fastest pizza delivery person in New York, has moved up to driving a hack. What begins as a wild ride to the scene of the crime gets even wilder as Washburn and Belle become unexpected allies while following the trail of a team of beautiful but reckless female bank robbers led by Vanessa (Gisele Bundchen). Adapted from a popular French action comedy with the same name, Taxi was Jimmy Fallon's first big-screen vehicle after leaving the cast of the popular sketch comedy series Saturday Night Live. ~ Mark Deming, Rovi

Will Cote
as Airport Cop #1

William Cote
as Cop #1 at Airport

Nashawn Kearse
as Cop in Harlem

Alli Danziger
as Girl at Bank

Tanner Schwartz
as The Hostage

Balls of Fury Writers Working on Night At The Museum 2
Walken Attached to "Balls of Fury"
Critical Consensus: A Regal "Holiday," A Well-Trodden "Road," A Tepid "Tristan"

Think twice before hailing this Taxi.

I expected this to be much funnier: Latifah coasts on her charm, and Fallon seems incapable of playing an actual character.

It would take a tankerload of laughing gas to pump some humour into this flat-tyred fiasco.

It's got suped up autos, suped up models, and suped up action. Fairly safe to say that it'll appeal to it's target audience, wethinks?

This is a cynical, tired example of filmmaking. Plenty of noise. Little va-va-voom.

As dull and dented as a Ford Pinto minus the exploding gas tank.

Take the bus instead.

While Taxi is certainly full of faults that would be hard for most good actors to overcome, Fallon provides the fatal blow himself by being the least interesting part of a pretty paltry movie.

Taxi has its share of fun, jazzy moments ... but too often the comedy is dragged down by running gags that start off unfunny and end up being just embarrassing.

Taxi is one long car chase, which quickly crashes and burns.

Buckle up for crap!

Althought this isnt really that great of a movie, i really cant help but really enjoy it! It amuses me greatly and although the story is predictable and not a lot going on theres still enough of something that makes it good! Im not sure what that something is however, it good be the decent car chases and action thats in the movie or the really sexy scene where Esposito is touched up! Purely on that it gets a thumbs up! An enjoyable movie thats amusing and will keep you amused!

Basically a crappy complete re-filming of a rather decent concept which was done allot better along time ago by Besson but ruined here by Hollywood. The casting is very poor, dumb and not entertaining in the slightest, the cars look shit and its all as cheesy as hell with poor obvious stunts. The inclusion of Gisele and her bad girl posse just seems like an obvious lore to try and get more bums on seats as they know how bad the rest of the film is, utter dribble, what was the point????

Taxi is massive pile garbage. The film is so stupid, so unimpressive, and very poorly acted. I caught this film waiting for classes in my College's Pub, as this was the film that was showing, luckily I went for a few cigarette breaks and missed a few parts, but in the end; I didn't miss anything. Queen Latifah is a terrible actress and has no skill whatsoever. Taxi is a bad film with a bad script that is pretty pointless and unoriginal. The films plot is paper thin and I was very irritated with the inept humor. The film didn't do anything for me, and it was a waste of time. Taxi is an awful that should've never been made. Taxi doesn't work because the script is so poorly written, the cast is so mediocre, and everything else is so over the top, that you lose interest. If you're looking for a good comedy, then this isn't the one. This film is awful. I was absolutely bored by this film, and I felt it was a film that absolutely didn't deliver anything interesting. The film proved that Queen Latifah is a talentless actress and that she is unable to do anything good. Taxi is simply a train wreck of a film and it's a film that I thought was one of the most annoying comedies to come out in a long time. This is a terrible film that everyone should avoid, there is absolutely nothing interesting or funny about the film. The film is just a collection of annoying characters played by bad actors and with a bad story to boot. The film fails as a comedy and is a total waste of time.

A decent comedy movie that has some serious funny scenes. Loved the car chasing. The ending was absolutely awesome. Though it seemed fake (like it looked those two cars wouldn't make it and obviously it's fake) but it was a great idea. Not great enough to recommend it though.