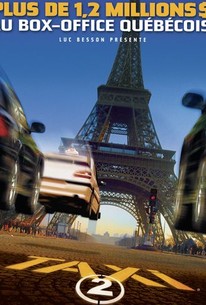 The cast and crew from the 1998 Gallic megahit Taxi return for this high-octane sequel about a crime-bustin' cabby and a defrocked cop. The film opens with Daniel (Samy Naceri) rushing a pregnant woman to the hospital in his souped cab through the streets of Marseilles. Meanwhile, taciturn cop Emilien (Frederic Diefenthal) finally passes his driving test after flunking 27 times in a row. The action really gets rolling when blonde bombshell police woman Petra (Emma Sjoberg) gets kidnapped on the toilet by ninjas and added to their collection of hostages, including the Japanese minister of defense. The yakuza are out for trouble, and nothing stands between bedlam and civil order but two guys and one wicked-cool cab.

There are no critic reviews yet for Taxi 2. Keep checking Rotten Tomatoes for updates!

Not a bad sequel, much like Fast and Furious 3 there is an oriental flavour to the proceedings here which is good for the cars of course, lovely chase sequence at the end of the film with plenty of carnage and wrecks all over the show :) The Peugeot 306 has been tweaked and turned from a serious racer into a kind of Bond car with all manner of crazy gimmicks, some good some lame but its good fun and cool to see it racing against three mighty Evo's (it wouldn't win in reality though hehe) The only problem here is the increasing sillyness of Gilbert, a bumbling 'Inspector Clouseau' rip off and really lame, this character does spoil the serious fun side of this and turns it slowly into a lampoon which unfortunately shows in the next two sequels.

French film with subtitles, would love to see it dubbed badly into english, great stuff with a ninja and customised motor theme going on

The exact same jokes of the previous film, making it repetitive and plain dull.

Another typical sequel that takes the sublime and makes it ridiculous. A car chase on the scale of the Blues Brothers, but with a tank? A taxi that sprouts wings?? And I'm not sure if something is lost in the translation, but the humour all seems to revolve around racism and sexism which leaves a rather unpleasant taste in the mouth.