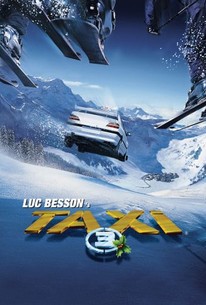 Lead-footed taxi driver Daniel (Sami Narceri) puts his personal problems aside to help the police nab an elusive group of thieves known as The Santa Claus Gang in this action-packed sequel from producer Luc Besson and director Gérard Krawczyk. The Santa Claus Gang is making the police look incompetent, and that doesn't sit well with Police Chief Gibert (Bernard Farcy). Now, as a Chinese reporter begins working on an article probing the local police force, Chief Gibert realizes his men will have to start working overtime in order to save themselves from some serious public embarrassment. Meanwhile, Emilien (Frederic Diefenthal) learns that he's about to become a father, and Daniel finds his romantic life in shambles. Though it takes a little convincing from the desperate powers that be, Daniel ultimately agrees to use his souped-up taxi to help the police put the jolly gang of bandits behind bars. Emma Sjoberg, Marion Cotillard, and Bai Ling co-star.

There are no critic reviews yet for Taxi 3. Keep checking Rotten Tomatoes for updates!

We are now turning full on towards a Bond spoof here, the Peugeot has become an almost jokey car with some seriously silly mods (including Caterpillar tracks) and the stunts are becoming waaay over the top and less believeable. Its still a fun film but the 'Fast n Furious' side of the film has given way to a 'Herbie Goes Bananas' style which is enforced all the more by bumbling Commander Gilbert :( poor character if ever I saw one and very annoying. Again the baddie is from the orient in Ling Bai (looking fudging gorgeous) and the plot is rather cliched and dumb frankly. The franchise has become more of a crazy stunt film now with cgi to boost those stunts, shame. Nice surprise cameo and stunt sequence at the start though ;)