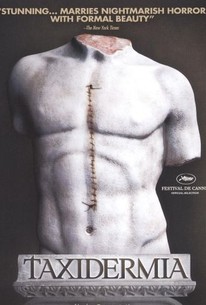 Critics Consensus: Surreal and visually striking, Taxidermia is, at times, graphic and difficult to watch, but creatively touches on disturbing subjects with imagination and wit.

Critics Consensus: Surreal and visually striking, Taxidermia is, at times, graphic and difficult to watch, but creatively touches on disturbing subjects with imagination and wit.

Critic Consensus: Surreal and visually striking, Taxidermia is, at times, graphic and difficult to watch, but creatively touches on disturbing subjects with imagination and wit.

"Taxideremia" contains three generational stories, about a grandfather, a father, and a son, linked together by recurring motifs. The dim grandfather, an orderly during World War Two, lives in his bizarre fantasies; he desires love. The huge father seeks success as a top athlete -- a speed eater -- in the post-war pro-Soviet era. The grandson, a meek, small-boned taxidermist, yearns for something greater: immortality. He wants to create the most perfect work of art of all time by stuffing his own torso. Historical facts and surrealism become intertwined as magical realism, like in the works of Gabriel García Marquez or the Hungarian writer Lajos Parti Nagy; the script is based on two of the latter's stories. Palfi added the third story, that of the grandson the taxidermist.

Taxidermia is frequently funny, for those who can stomach it.

Taxidermia sets a benchmark for body horror in the cinema.

Taxidermia is a brilliant, often grotesquely bizarre allegory on life in Hungary from World War II to the present, a surrealist fantasy exploring the limits of the body and its desires and altogether a darkly funny comedy.

And now a word of advice from your friendly film critic: If you go to see the Hungarian black comedy Taxidermia, don't plan to eat afterward.

Pálfi's skill at making something as churlishly repulsive as a scene of self-mummification completely mesmerizing is a testament to his unparalleled dedication to imaginary grotesques.

Mr. Pálfi's grandiose vision and technical bravado are nothing short of mesmerizing, yet there are also plenty of tender moments amid the go-for-broke follies.

The gluttonous middle section of the film is by far its most successful.

As sweeping in scope and vision as it is in viscera.

For those who can handle it, a viewing is an experience not soon forgotten.

An interesting film that may be too repulsive but still we never look away. With a memorable direction and camera work, it tells a cynical (and often hilarious) story about three generations of deviant men who are a reflection of Hungary's History since WWII.

Disgusting at times but also beautiful in the way it is presented. A great visual style, wonderful lighting and an imaginative series of events leads to a film unlike most others. One scene involves a pop-up book come to life. A whole film should be shot this way as that single moment was fantastic. Another great thing about this film is that you will see things you will never see anywhere else, such as a man shooting fire from his penis and a man having sex with a pig's carcass. This will be hard to stomach for some, and keeps it's comments on humanity buried beneth the surface. If you want to see some great vomiting sequences I suggest you watch Taxidermia. Foul, gross and weird, just like life. Well maybe a bit fouler, grosser and weirder than life.

Bizarre visceral story of three ages of man which has some wonderful visual flourishes backed up with great sound. The middle story is laced with a dark humour but I'm not quite sure of the point of it all.