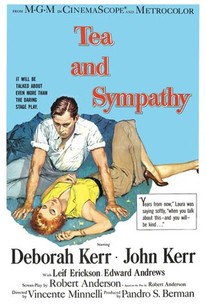 1956's Tea and Sympathy is a diluted filmization of Robert Anderson's Broadway play. The original production was considered quite daring in its attitudes towards homosexuality (both actual and alleged) and marital infidelity; the film softpedals these elements, as much by adding to the text as by subtracting from it. John Kerr plays a sensitive college student who prefers the arts to sports; as such, he is ridiculed as a "sissy" by his classmates and hounded mercilessly by his macho-obsessed father Edward Andrews. Only student Darryl Hickman treats Kerr with any decency, perceiving that being different is not the same as being effeminate. Deborah Kerr, the wife of testosterone-driven housemaster Leif Erickson, likewise does her best to understand rather than condemn John for his "strangeness." Desperate to prove his manhood, John is about to visit town trollop Norma Crane. Though nothing really happens, the girl cries "rape!" Both John's father and Deborah's husband adopt a thick-eared "Boys will be boys" attitude, which only exacerbates John's insecurities. Feeling pity for John and at the same time resenting her own husband's boorishness, Deborah offers her own body to the mixed-up boy. "When you speak of this in future years...and you will...be kind." With this classic closing line, the original stage production of Tea and Sympathy came to an end. Fearing censorship interference, MGM insisted upon a stupid epilogue, indicating that Deborah Kerr deeply regretted her "wrong" behavior. ~ Hal Erickson, Rovi

Peter Leeds
as Headmaster at Bonfire

Del Erickson
as Ferdie
View All

Critic Reviews for Tea and Sympathy

Robert Anderson's adaptation of his own legiter keeps the essentials in proper focus.

Surprising as it may seem, in the light of the screen's Production Code, which generally compels evasion of the more delicate sexual subjects in American films... Tea and Sympathy has been given a strong and sensitive screen rendering.

Dated and bowdlerized but nonetheless sincere.

The only two dramatic moments in the play have been so expanded, made so explicit, that they lose their impact.

Though stale, betraying its theatrical origins (Kazan did it on stage), Minnelli's version still reflects the sexual and social anxieties of the McCarthy era as well as of his own life.

Remarkable early report on The War on Homosexuals.

This stands as one of Minnelli's feebler efforts.

Audience Reviews for Tea and Sympathy

There are no featured audience reviews yet. Click the link below to see what others say about Tea and Sympathy!