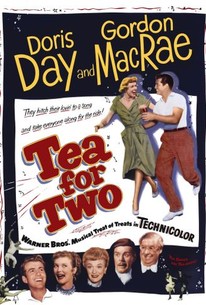 Tea for Two is a Technicolor adaptation of the 1924 Broadway musical No No Nanette, previously filmed under its own title in 1929. Doris Day stars as Nanette, a Roaring '20s Jazz Baby with showbiz aspirations. Nanette offers to put up $25,000 if producer Billy DeWolfe will star her in a Broadway show. The girl's wealthy, and stingy uncle S.Z. Sakall agrees to advance her the money, but only on one condition; for the next 24 hours, Nanette must answer "No" to every question. Gordon MacRae co-stars as Nanette's attorney, who worships her from afar and who finally manages to win her hand with a little wager of his own. The songs, culled from several sources and written by hands ranging from Irving Caesar to George Gershwin, include "Crazy Rhythm," "Do Do Do," "I Want to Be Happy," "I Only Have Eyes for You" and the title number. In 1970, the original No No Nanette was successfully revived for Broadway, with veterans Ruby Keeler and Patsy Kelly in the cast. ~ Hal Erickson, Rovi

Critic Reviews for Tea for Two

This is a good musical, and I thoroughly recommend it.

Overcomes its sloppy set-up to be light, enjoyable entertainment.

Tea For Two is saddled with a ridiculous plot that only gets worse as it gets acted out.

Audience Reviews for Tea for Two

Breezy version of No, No, Nanette in beautiful Technicolor. Doris and Gordon always made a good team in their films and this is no exception both are in fine voice. Eve Arden proves again that along with Thelma Ritter she was the best supporting actress the movies ever had. The only small quibble-since the film is set in the 20's why are all the hairstyles and fashions straight out of the 50's?