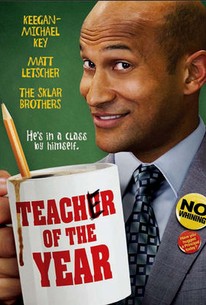 Teacher of the Year Photos

Surrounded by the eccentric faculty of Truman High School, Mitch Carter wins the California Teacher of the Year award and immediately receives a tempting offer that may force him to leave his job.

News & Interviews for Teacher of the Year

View All Teacher of the Year News

Critic Reviews for Teacher of the Year

Teacher of the Year is a smart and funny movie that manages to pull off one of the more difficult balancing acts in filmmaking; it actually is smart while still being funny.>

Weirdly, this tonal combination actually works, most of the time at least.

Strouse's strong suit is his casting. His writing and directing are solid, but his ability to select the right actor makes all the difference in "Teacher of the Year".

Thanks to a highly-skilled group of comedic actors with years of experience --- largely honed on television --- and the absurdist humor of writer/director Jason Strouse, "Teacher of the Year" is a film I can heartily recommend.

This excellent mockumentary highlights the business of teaching high-school kids to hilarious and poignant effect.

With a strong ensemble cast... It uses the documentary style in an effective manner that kept the character beats consistent with the laughs and felt like a true winner.

It's a grade above most high school comedies that trade on sexualized teens, a laugh-out-loud, sweetly-irreverent-but-never-raunchy look at education from the inside out.

Audience Reviews for Teacher of the Year

This film came as an interesting find on Netflix. The documentary style was great and the concept kept the pacing and comedy right in check. It is very much in the Christopher Guest style of filmmaking and you never know what the next crazy is going to be. Keegan is central to the marketing but is only a supporting player and that is a bit misleading. I think most of the negative comments are based on the inconsistent beats and storyline, but I found it very funny and brilliant at times. 05/05/2017.

I wouldn't call this the best comedy of the year, but I do think that it is a good one and one that definitely has its heart in the right place. It showcases the struggle of being a teacher in the public school system. But it also covers the good that some of these teachers, when they're truly committed, like Mitch, can make in the lives of their students. It also tackles the conundrum teachers face, or at least some of them do, when a better job comes across, that pays considerably better than their current one, and the thought process that goes behind that, particularly if you genuinely love teaching. I think the film works because there's a certain believability to everyone they cast in the film. Some of the characters themselves, like the guidance counselors and the robotics teacher, might obviously be exaggerations, but they just feel like they belong in this world. The guidance counselors themselves pretty much offer the most laughs out of the entire film. They're clearly the worse guidance counselors of all time, giving the kids terrible advice like becoming bulimic because certain schools like skinny girls, stuff like that. It's actually pretty damn funny. Here's the thing about the film though, I wouldn't actually call it hilarious, not in the least. The film is populated by eccentric teachers that definitely make you laugh, but I wouldn't say it's a laugh-out-loud movie. And I don't think that it was meant to be. And I wouldn't also call it the most realistic portrayal of the public school system in the United States, seeing as the school that's portrayed in the film is actually pretty good, in comparison to some of the really bad ones. But I do think that the film does hit on some very real issues about the system, the relationship the teachers have with the parents, students and each other. So, at the very least, the film does have more on its mind than just making you laugh. The film is well-written and definitely very well-acted. I think the cast, even if the film isn't great, is really good and would definitely be the highlight of the film. Mitch is incredibly likable and you're with him right from the start as a character. The film, at less than 75 minutes, with several post-credits scene, which probably didn't fit within the context of what the film was going for, is super easy to watch. And I would definitely recommend this, even if it's not the best. It's a good movie. It's funny and it feels purposeful, it's not just a movie for the sake of making one. It has a reason behind its existence. It's an easy recommendation, honestly. Not the best, but definitely quite good.

Teacher of the Year Quotes