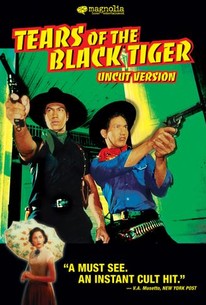 Critics Consensus: With a vibrant pastel color scheme and stylized action sequences, Tears of the Black Tiger is a bizarre, yet thoroughly entertaining Thai western.

Critics Consensus: With a vibrant pastel color scheme and stylized action sequences, Tears of the Black Tiger is a bizarre, yet thoroughly entertaining Thai western.

Critic Consensus: With a vibrant pastel color scheme and stylized action sequences, Tears of the Black Tiger is a bizarre, yet thoroughly entertaining Thai western.

One of the most elaborate productions ever mounted in Thailand, Tears of the Black Tiger is a candy-colored Western made in the high-energy style that characterizes much contemporary Thai cinema. The plot is a traditional boy-meets-girl, boy-loses-girl, boy-gets-girl-again story that references both classic American Westerns and Thai folk tales. Poor boy Dum (Chartchai Ngamsan) and rich girl Rumpoey (Stella Malucchi) first lay eyes on each other as children when her family escapes Bangkok to his country hometown during World War II. When they meet again ten years later, they fall instantly in love and decide to marry. But the disapproval of her parents and a band of rampaging bandits led by the villainous Mahesuan (Supakorn Kitsuwon) combine to threaten their plans for future happiness. ~ Tom Vick, Rovi

This virtual Western, set in Thailand, directed by Wisit Sasanatieng, has some of the most exuberantly stylized action scenes and one of the gaudiest color palettes in the recent cinema.

Has lots of pop energy and an admirable poker-face when it comes to its Douglas Sirk-ian storyline. And even though it's essentially a Frankenstein's monster stitched together from a zillion other movies, you really haven't seen anything like it.

The movie is a riot of tropical turquoise, magenta and pink, spiced with marigold, red and green. You'd swear it was drenched in a tangy tamarind sauce

The movie is fun to watch, with an attractive cast.

You've never seen and never will see anything quite like Tears of the Black Tiger.

It's safe to say you've never seen a film like this before.

"Tears of the Black Tiger" is a truly cult film in all aspects and provides a very rewarding experience, although I felt that the romantic aspect could be a bit toned down

It is nice just to sit back and let the day-glo colours wash over you, marvelling at the high-spirited energy.

If the story were as captivating as the color palette, we'd all be crying tears for the Black Tiger.

Tears of the Black Tiger ultimately works best as an exercise in cinematic style, making it not only a quirky little nostalgia trip but a noteworthy cult flick worth checking out.

Tears of the Black Tiger is like a fever dream dripping with overripe romantic melodrama. Imagine Douglas Sirk directing a spaghetti western.

Delirious and oddball at once, it's like a plate of meringues -- delicious at first, but soon everything tastes the same, and after a while you get sick.

I've only seen Thailand martial movies and only one out the dozens I have seen was any good. So I chose to explore Thai cinema outside of the Martial Art genre, which failed to change my outlook on Thai cinema. Tears of the Black Tiger is certainly one of the better Thai films I've seen, but its many references to classic westerns keep reminding of other superior films I could be watching. Tear of the Black Tiger is a parody as well as a homage to the Western and the romantic tearjerker. The plot here is so-so, its simply there and goes by without much to give us. The movie dialogue is more corny than a Spanish soap opera. It uses many of the cliches of the western genre which it pokes fun of, but becomes cliche itself for using to much of them. Contains over the top violence; like a man flipping in the air after being shot with a pistol in the mouth. Surprisingly the violence here uses tons of blood whenever someone is killed. The acting is good though ultimately underwhelming due to the lack of screen time some of the actors get. This is a classic case of style over substance. Most of the efforts went into the unique and sometime odd color scheme of the visuals. Some of the shootouts even if over the top were fun to watch. As a fan of the western genre I enjoyed the film offering, but it gets caught up in reminding us of past influential films and failing to give the audiences something new in the process. Tears of the Black Tiger takes inspiration from superior films and fails to capture the same essence as its influences. It's good if you want to past the time, just do not go into this expecting anything as from the genre usual standards.

This is the kind of movie that restores my faith in cinema. A love letter to old Thai flicks and spaguetti westerns, "Tears" is the right mix of homage and style. This is not a "parody", and seems that western movie templates can't tolerate the existance of movies like this one without sticking the "parody" label. This movie was not spilled by some recycling-nostalgia-pop culture machine, made to sell false images of new "coolness" to kids. This a honest work of love and dedication, that happens to have fun with the material.

Childhood sweethearts are tragically separated. One becomes an infamous bandit, and the other is arranged to marry a police captain who plans to hunt him down. A campy Thai spaghetti Western with arthouse visuals, this flick screams, "Look at me! I'm a cult movie!"