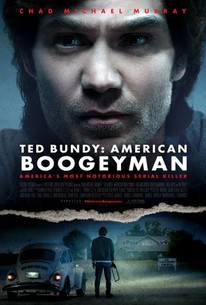 A specter roams the highways of a gritty and decadent 1970s America, hunting for his next prey--his name is Ted Bundy (Chad Michael Murray). Tracking him down are the intrepid female detective Kathleen McChesney (Holland Roden), working out of the Seattle Police bureau, and rookie FBI profiler Robert Ressler (Jake Hays), the government agent who coined the term "serial killer." This is the true story behind the manhunt that brought America's most fearsome boogeyman to justice.

Honestly, there is no earthly reason for the existence of this film; it might work for the Bundyphiles but it leaves a nasty taste in the mouth for everyone else.

American Boogeyman might be dreck, but the title gets one thing right: This boogeyman isn't going away as long as there's a buck to be made off the name.

Ted Bundy: American Boogeyman aims for chilling and lands on boring, and fails mightily to justify its existence.

It's not a bad movie from a technical standpoint. But it doesn't really contribute anything new to a story told too many times about a sociopath who doesn't deserve so much of 'the Hollywood treatment,' or any of it, really.

Not only doesn't understand the definition of "boogeyman," but reaches a new low of tastelessness, transforming Bundy's barbaric ways with female victims into bottom-shelf schlock

Ted Bundy: American Boogeyman does little to add to the cinematic legacy of both Ted Bundy and the subsequent investigation into his murders.

Belongs to the "changed and fictionalized" school of true-crime click-baits... Leave this one alone.

Do we really need another Ted Bundy film, especially one that has nothing insightful to say? No. So why then does Ted Bundy: American Boogeyman exist?

The only thing you will learn is that this movie will surely hold the title of the worst movie ever made about Ted Bundy. This isn't just like watching a train wreck. It's like watching a nuclear bomb of extremely bad taste and putrid filmmaking.

Lin Shaye is excellent in a small but extremely pivotal role as Bundy's mom.

There are no featured reviews for Ted Bundy: American Boogeyman at this time.