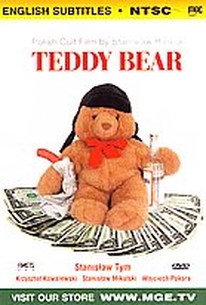 Referred to in one publication as the Czechoslovakian equivalent of The Big Chill, acclaimed writer-director Jan Hrebejk's ensemble comedy-drama Teddy Bear (AKA Medvidek, 2007) observes the nuptial relationships of three long-acquainted male buddies who appear to have everything: affluent OB-GYN Roman (Roman Luknar) is expecting his first baby with wife Anna (Anna Geislerova; Ivan - a Czech diplomat to Italy - is planning a natal conception with wife Johana (Natasa Burger); and art gallery owner Jiri (Jiri Machacek) enjoys the the vicissitudes of early parenthood with wife Vanda (Tana Vilhelmova), a coffee house proprietress. Hrebejk, of course, begins on this polished surface and breaks it open to reveal unhappiness and desperation beneath, thus cross-sectioning each marriage as it hits a point of crisis: one wife confesses to a friend of a long-standing deception regarding the paternity of her child; another boots her husband out of the house for lipping off to her; and a third learns of her spouse's infidelity and parenthood with another woman. Meanwhile, Roman's mom and dad (Vera Kresadlova and Czech film giant Jiri Menzel) remain committed to a lengthy marriage in spite of occasional difficulties, suggesting that commitment is not the priority that it once was in Czechoslovakian society, and Vanda's sister shocks everyone by planning for single motherhood. Petr Jarchovsky co-authored the script with Hrebejk. ~ Nathan Southern, Rovi

There are no critic reviews yet for Teddy Bear. Keep checking Rotten Tomatoes for updates!

There are no featured reviews for Teddy Bear at this time.