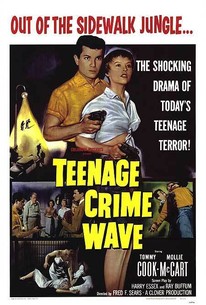 The "juvenile delinquent" film cycle of the 1950s, sparked by The Blackboard Jungle, resulted in such hastily assembled B-flicks as Columbia's Teenage Crime Wave. The "crime wave" of the title consists of the criminal activities of teenager Mike Denton (Tommy Cook). After escaping from reform school, Mike goes on a statewide shooting spree, accompanied by his girlfriend Terry Marsh (Mollie McCart) and victim-of-circumstance Jane Koberly (Sue England). Most of the film takes place in the farmhouse of middle-aged Tom Grant (James Bell), as Mike, Terry and Sue hold the Grant family hostage. Since Sue is really a nice kid at heart, the audience can rest assured that she will foil Mike's perfidy before fade-out time. One noted film critic has bestowed a "BOMB" rating upon Teenage Crime Wave, though it's certainly no worse than the others of its ilk.

There are no critic reviews yet for Teen-Age Crime Wave. Keep checking Rotten Tomatoes for updates!

There are no featured audience reviews yet. Click the link below to see what others say about Teen-Age Crime Wave!