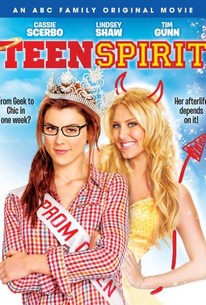 A teenage queen bee suffers a fatal mishap on prom night, and attempts to earn her angel wings by turning her misfit classmate into the next Prom Queen in this heavenly high school comedy. Every girl at Eugene Ashley High knows that Amber Pollock (Cassie Scerbo) rules the school. Now, the only thing preventing Amber from achieving legendary status is the fact that she's never been elected Prom Queen. But just as Amber prepares to don the crown, a shock accident sends her to an early grave. Though her cruel and selfish behavior would typically ensure Amber a one way elevator ride straight down, the higher-ups in heaven offer her a chance to get past the pearly gates by transforming shy Lisa Sommers (Lindsey Shaw) into the next Prom Queen. Given Lisa's complete lack of fashion sense and her geeky penchant for making claymation films, it would seem Amber has her work cut out for her. Meanwhile, the last thing Lisa wants is to be elected Prom Queen. But Lisa has been crushing hard on hunky classmate Nick (Chris Zylka), and now if Amber can just instill her with enough confidence to catch his eye, Prom Queen won't seem like such a long shot, and that elusive halo will shine brighter than any dime store tiara ever could.

There are no critic reviews yet for Teen Spirit. Keep checking Rotten Tomatoes for updates!