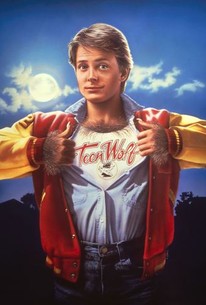 Critics Consensus: Though Michael J. Fox is as charismatic as ever, Teen Wolf's coming-of-age themes can't help but feel a little stale and formulaic.

Critics Consensus: Though Michael J. Fox is as charismatic as ever, Teen Wolf's coming-of-age themes can't help but feel a little stale and formulaic.

Critic Consensus: Though Michael J. Fox is as charismatic as ever, Teen Wolf's coming-of-age themes can't help but feel a little stale and formulaic.

After sitting on the shelf for some time, Teen Wolf was released on the heels of the hugely successful Back to the Future in an attempt to cash in on the huge popularity of star Michael J. Fox. Teen Wolf chronicles the plight of Fox as a small-town nerd who can't seem to score a basket on the court or a point with his dream girl. Things change, however, once he discovers his family's hereditary secret, lycanthrope. As he begins to look hairier and hairier, his team begins to win basketball games and his dream girl begins to show interest in his unusual talent. His story does not progress without complications, however. His best friend, an opportunistic weasel, begins to exploit him beyond his limits of toleration, and his dream girl is captive to the requisite bully boyfriend, who, of course, captains the arch-rival basketball team. And then, to top it all off, Fox's other best friend is in love with him. Unbelievably, this film was a box-office success and eventually inspired an even worse sequel, Teen Wolf Too, several years later -- a film which Fox wisely declined.

Richard A. Baker
as Referee

Tanna Herr
as The Beaver

Larry B. Daugherty
as Basketball Player
View All

To his credit, director Rod Daniel has crafted an amiable teen film and gets a pleasing performance from Fox in the title role. Yet Teen Wolf, especially in the basketball sequences, loses its dramatic dribble.

The whole thing is absolutely ridiculous--have you ever seen a wolf break dance?--and a good deal of fun.

Fox somehow survives on the sheer force of a pleasant screen presence, but those who remember The Shaggy Dog ought to stay away.

Lightweight item is innocuous and well-intentioned but terribly feeble, another example of a decent idea yielding the least imaginative results conceivable.

Michael J. Fox's early lycanthrope comedy doesn't have the easy charm of his later movies such as the Back To The Future franchise or Doc Hollywood, but it's still a diverting enough tale.

Rather than a wolf in sheep's clothing, Teen Wolf is basically a standard 80s teen flick in werewolf's clothing.

The movie plods towards a predictable ending and misses all sorts of chances to be funny.

If in Back to the Future the problem is solved by rewriting family history and transforming the father into a winner, here the solution is much more fantastic, although less fun. [Full review in Spanish]

As the unfortunate teenager, the ever-engaging Michael J Fox is doing what he does best - turning a loser into a winner.

This combination of wolf and Fox is well-intentioned, harmless fun, and it's got I Was a Teenage Werewolf, the lycanthropic skeleton in Michael Landon's closet, beat by a mile.

Fox is enormously likable here, but the gimmickry of the werewolf transformation and Fox's lupine existence is just that - a gimmick, a wholly artificial contrivance that intrudes on the character.

In the same year that Fox became a superstar going back to the future he also had this little werewolf gem creep out. The title says its all really in its brilliant cheesy way, a typical 80's film title. Young teen Fox slowly discovers that he is in fact a werewolf and its been in the family for generations. In all honesty this is your very standard cheeky 80's high school romp which was the staple diet of many classic comedians throughout the 70's and 80's. The twist in this of course is the supernatural element which is simply a play on the effects of puberty, swapping spots for claws. Its all here as you would expect, the sexy blonde everybody lusts after, the plain brunette our hero never notices, the party obsessed crazy ass best friend, the quiet sensible best friend, the bully, the fat kid, the token black guy (lemonade...awesome character name) and various amusing stereotypical teachers. The best easily being the carefree gum chewing basketball coach. So if you put the predictable teen antics to one side what are the wolf antics like? Well its pretty darn sweet as a matter of fact, and what's more amazing is the makeup effects on show are really quite good. The little sequence of Fox turning into the wolf has clearly been influenced by 'An American Werewolf in London' and its a really well done moment. Its not scary or gruesome in any of course but it still does look quite realistic utilising simple effects and quick editing. His father in wolf mode doesn't look quite as good admittedly, more like a greying woodland animal with puffed up hair. There isn't all that much wolf action so to speak, its mostly more silly high school antics but in wolf mode. Wolf mode gives our hero greater strength, better vision, brains etc...the guy becomes a super werewolf and aces everything in school whilst becoming a ladykiller (not literately). The main events of the film are based around the high school basketball games in which Fox's character usually sucks but naturally as a werewolf he's turned the game on its head. This film actually got me into basketball for a time, it introduced me to the game, because of this I bought NBA Jam. The game segments are really good fun and as the film climaxes it does get a little emotional I can't deny. The game montage accompanied by Mark Safan's 'Win in the End' is glorious mainly down to that corking track. Funny how the underneath of Fox's arms didn't have any werewolf hair applied, always obvious when he raises his arms. I think people can relate to this film in many ways, certain characters despite them being cliche, the problems of popularity, loneliness, bullying, sexuality etc...usual teen stuff. In all fairness this film doesn't really differ much from the vast array of fast food American high school flicks out there, the werewolf angle is only a different representation of teen angst. It shouldn't really be a good film but somehow it is, what you see isn't original and there aren't any dazzling special effects, its more a character/school based fantasy which is simply a good fun little ride. Attractive performances all round especially from Levine as Stiles and a wicked soundtrack make this a solid cult gem.

"It's really odd how you can love a movie so much as a kid to only to grow up and watch it again to see how cheesy and poorly made it is. But I still love it! Michael J. Fox was a favorite of mine growing up. I loved him in this and the Back to The Future movies. I miss him in movies. He's a great actor. The film is silly and corny, but enjoyable and fun. It doesn't hold the same level of awesomeness it did when I was younger and first seeing it. Still, I will forever love this movie. The 80's have movies that I will continue to love no matter how cheesy they may seem today."

Pretty good comedy horror flick with teen flair, Teen Wolf delivers a good time with a good cast of actors who are great to watch on-screen. Although not as memorable as other horror comedies of the 80's, Teen Wolf is still a must for all horror fans. There are things that could have been done better, but for the most part, it succeeds at being a very entertaining film. This is cheesy 80's comedy horror at its best. This is a fun twist on the usual werewolf flick, and it works. Although not perfect, this film is still a must see with great gags on-screen, and a cast that's sure to please. The film at times is weak, but as a whole it succeeds at entertaining you because of the new ideas expressed in its story. The film may falter at times, but it doesn't prevent it from being a fun, entertaining hour and a half. I very much enjoyed this film, Michael J. Fox was very good here, and he made the film work. If you're looking for a fun cheesy comedy horror film that is meant not to be taken serious, Teen Wolf is that film. A very enjoyable film from start to finish this is an underrated film that deserves a lot more praise than it has gotten. Sure there are things that could have been improved upon, but in the end, the film still manages to be worthwhile viewing. If you enjoy 80's comedy horror cheese, then Teen Wolf is the perfect film for you to watch and fill that void. A different take on werewolf films and it pays off.

Harold Howard: Yeah, I saw, unless that was another werewolf doing a handstand on top of Stiles' wolfmobile and making a fool of himself.  "He always wanted to be special.. but he never expected this." A movie this stupid really depends on how fun you find it. I didn't enjoy myself. I'm going to nitpick a little bit here. I know this isn't a basketball movie, but if you are going to devote as much screen time at they do to basketball, at least make the games make sense. It looks like the director of the movie has never seen a basketball game in his life. First foul, he's shooting free throws and then after a foul, they do a jump ball. Little shit like that annoys the hell out of me. I guess if you aren't familiar with any concept that goes into basketball, you won't notice. With that to the side, I still didn't find this movie very entertaining.  Scott is an average kid who plays on a crappy basketball team. He isn't really good at anything. All of a sudden he starts to notice little changes, like fur growing on his hands and the fact that he can hear a dog whistle. Well to his surprise, but not his fathers, he is a werewolf. Unlike most werewolf movies the people around him just go with it. He changes in the middle of a game and after staring at him for a few seconds start playing again. Also, being werewolf makes hot girls who never noticed you before horny. Teen Wolf is actually rather dull for the story. You would think that there would be at least a little joy coming from the ridiculousness, but no. The film is as average as Scott before he becomes a werewolf. It's also extremely strange and I don't mean because the character turns into a werewolf and everyone begins to love him. No the whole movie is just really strange in a way that is hard to describe. A guy surfs on the hood of a van while "Surfing U.S.A. plays, there's weird montages with some of the worst songs I've ever heard playing during them, and then there's the dialogue like: Mick: You don't scare me, freak. Underneath all that hair, you're still a dork, Scott. I've handled your kind before. Your mama used to steal chickens out of the backyard until I blew her head off with a shotgun. Right, Scott?  Look, it could have probably been worse, but it just really sucks. Watch it if you must, but God the more I think about it, the more I hate it.