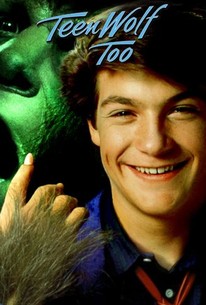 Critics Consensus: Aiming for the low bar set by its predecessor and never coming close to clearing it, Teen Wolf Too is an unfunny sequel whose bark is just as awful as its bite.

Critics Consensus: Aiming for the low bar set by its predecessor and never coming close to clearing it, Teen Wolf Too is an unfunny sequel whose bark is just as awful as its bite.

Critic Consensus: Aiming for the low bar set by its predecessor and never coming close to clearing it, Teen Wolf Too is an unfunny sequel whose bark is just as awful as its bite.

Jason Bateman stars in this sequel to Teen Wolf as the original's cousin, Todd. Though not a boxer, he receives a college boxing scholarship, and upon discovering that he is afflicted with the same werewolf genetics, transforms from unremarkable to unbelievable.

News & Interviews for Teen Wolf Too

12 Comedy Sequels Nobody Asked For

View All Teen Wolf Too News

Critic Reviews for Teen Wolf Too

An improvement over its source film.

Makes the original seem like an important work of art.

"Teen Wolf Too" is so awful you want to howl out loud...

An anaemic rip-off interesting only as a minor 1980s artefact.

The pacing is near-cataleptic and the movie's intended comic highlight is a frog-fight in the biology lab. Isn't that just what you're dying to see and hear?

An awful sequel to a mediocre original.

We've seen it all before, and I warn you: This movie is a dog in wolf's clothing.

"Teen Wolf" had a laugh or two. "Teen Wolf Too" has none.

If this flick were on TV, you'd switch channels to watch a commercial.

No one should pay any attention to this picture.

Audience Reviews for Teen Wolf Too

Sequel to Teen Wolf is not the film that it could have been. This film is poorly constructed and has a recycled plot from the first one with a different lead actor and setting. The film had an interesting idea for its plot, but the filmmakers seem to be going through the motions and don't have anything exciting to offer. The film is just dull, boring and stupid. The fact that Michael J. Fox is absent from the film makes this a bland affair. There's really nothing new going on here, and Teen Wolf Too is just a poor sequel to a comedy horror classic. The result on-screen is a film that just doesn't have anything interesting. This film just tries to cash in on the success of the original, and it does it very poorly. This film was horrible, and doesn't have the magic the first one had. The first one was cheesy, but it was lots of fun from start to finish. However this film is just too predictable, and add to that a bad cast, a poorly written script that just isn't interesting, and you have a bad film. Stick with the original, although cheesy, imperfect and corny at times, it was a fun film to watch. This, on the other hand is just a failed attempt at building on the original by using old ideas instead of using something new. This is just a tiresome film that isn't worth your time. Jason Batman has done much better than this, and he does what he can with such a poor script, but ultimately it ends up being a dire, predictable and boring film that you just don't care about. Watch the original Teen Wolf instead; this film is basically a rehash of ideas previously explored in the first film. You're not missing much by not watching this.

One of the worst movies of the 80s, it's not a good comedy, not a good werewolf movie, and not a good sequel. What is good about it? The music maybe? Not much...

Um... is this a joke? A prank pulled on the people of America? A ruse? Because this is the same movie as the first one. Every beat is the same. This is a joke of a sequel due to it not being anything more than the exact same movie but they swapped out basketball for boxing. What a brilliant idea! Let put a young man in the ring with a werewolf and have them fight. What could go wrong?