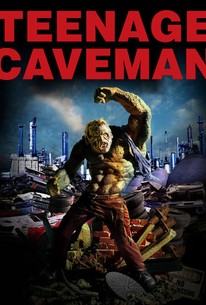 Part of the "Creature Features" retro horror movie series on Cinemax, Teenage Caveman is an exploitative remake of Roger Corman's 1958 sci-fi B-movie, re-imagined by director Larry Clark (Kids, Bully). In a post-apocalyptic Neanderthal-style future world, teenage tribal leader David (Andrew Keegan) kills his Shaman father (Paul Hipp) for trying to have sex with his girlfriend, Sarah (Tara Subkoff). Because his father is this big spiritual leader, David is publicly punished and left for dead. However, his attractive band of teenage malcontents rescues him before the whole gang is swept up in a nuclear storm. They end up in the conveniently stylish 20th century dwelling of uninhibited Neil (Richard Hillman) and sexed-up Judith (Tiffany Limos), leading to the inevitable orgy of naked teenagers indulging in sex, drugs, and general gracelessness. The gore-filled conclusion involves several characters literally exploding. Teenage Caveman was the last production for late exploitation mogul Samuel Z. Arkoff.

Somewhat intentionally trashy and fun, but not nearly as trashy as you'd expect or hope for from Clark.

Larry, what are you doing slumming it with non-material like this?

Just grab some popcorn, kick back, and laugh.

...While Teenage Caveman is a testament to Clark's auteurist position, it establishes him as a filmmaker of limited range.

Weird Larry Clark film remake. Boy, that dude loves the younguns. Still, not terrible, but not much to recommend.